Blade is Marvel-themed 5-reel max 20-pay line online slot from Playtech. If you’re not up on your comic books, then you will need to know that Blade originates from the Marvel Comics Universe and first appeared in July 1973. Blade is a vampire hunter, who goes around slaying nefarious neck-nibblers with his mighty sword and an impressive array of other sharp implements.

Blade is half-vampire himself and possesses superman strength, speed and stamina. He was portrayed on celluloid by Wesley Snipes in a trilogy of averagely-received movies released in 1998, 2002 and 2004, and by Kirk Jones in a short-lived 2006 TV series. 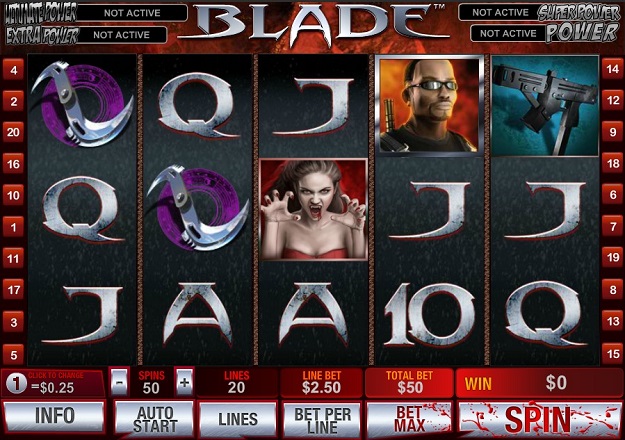 The symbols used in this slot are playing card values ten to ace, an impressive array of anti-vampire weapons and a vampire vixen who’s looking more than just a little peckish.

You are in full control of your staking factor (just like Blade) for this slot. You can choose your coin size from 0.01 to 1.00, and the number of lines you want in play from one to all twenty. You can also choose your bet-per-line from between one and ten. The bigger your choices, the more likely you are to win a larger cash payout. Your final wager is your coin size multiplied by your bet-per-line multiplied by the number of lines in play.

There are a number of potential cash payouts available, and to win one you simply need to land at least three identical symbols in sequence from the left-hand reel on one of your active pay lines.

The lowest winning payout is for three tens, which will win you double your bet-per-line. The maximum is an amazing 25,000x your wager, which you receive for six of Blade himself. If you’re wondering how you land six symbols on a five-reel slot, then check the ‘Blade Split’ bonus feature as explained below.

Once you’ve everything set just how you like it and you’re ready to go hunting some vampire-themed pay outs, hit the ‘spin’ button.

Wild Symbol: The trim-looking Blade acts as the wild symbol in this slot. He substitutes for all other symbols aside from the scatter and ‘Blade Split’ symbol.

Scatter Symbol: The Blade logo acts as the scatter symbol, and landing at least three anywhere on the reels will award you a cash prize and fifteen free games. During free games the scatter symbol now becomes an extra wild symbol and a dynamic multiplier comes into play.

Split Symbol: The Blade Split symbol only appears on reel five and when it lands, it triggers the ‘Blade Symbol Split Feature’. The last winning symbol in any winning combination will then be split in two, meaning that winning combos of six identical symbols is possible. All symbols can be split aside from the scatter.

Marvel Multi-Level Mystery Progressive Jackpot: This progressive jackpot is built up from all players playing all of Playtech’s Marvel-themed slots online. There are four jackpots in total – Power, Extra Power, Super Power and Ultimate Power. This jackpot is awarded at random, but the more you wager on Blade, the more likely you are to be awarded the jackpot.

If the jackpot screen pops up, you will see a 5×4 grid containing twenty mystery squares. You keep selecting squares to reveal jackpot symbols. Once you uncover three identical symbols, you are awarded that jackpot as your prize.

Playtech’s Marvel slots have a great reputation and the Blade online slot does nothing to diminish that. It has lots of nice features that really give the game that extra little bit of bite, and of course you get the chance of winning one of the Marvel progressive jackpots.

Why not tool up and head out for a bit of jackpot hunting with Playtech’s blood-thirsty Blade online slot?