The Avengers are one of the most decorated superhero teams in the history of comic books. Led by famous names like Captain America, Iron Man, Thor and the Hulk, the Avengers have been fighting evil since 1963. They were also the subject of an incredibly successful 2012 film, which has once again caused a rise in their popularity. That makes this the perfect time to give Playtech’s The Avengers slot machine a try. 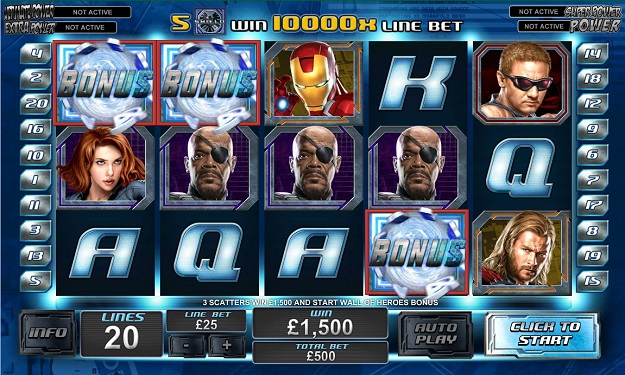 The Avengers is a Playtech-powered slot machine that features five-reels of action. Players can play a single coin on up to 20 different paylines, with coin denominations ranging from €0.01 to €5.00, meaning it is possible to spend up to €100 on a single spin.

In order to win prizes on this machine, you’ll have to match at least three of the same symbol in a row from left to right on one of your active paylines. Smaller wins can be earned by matching queens, kings and aces, but to win a big prize, you’ll need to start matching some of the heroes that make up the Avengers team. You’ll be able to score wins by matching Black Widow, the Incredible Hulk, Thor and Iron Man. The biggest win of all comes from Captain America, who is worth 1,000 credits if you can hit five in a row.

The S.H.I.E.L.D. symbol acts as the wild for this game, and can substitute for any of the regular symbols to complete wins. Hitting two or more wilds in a row is also worth a prize, with players winning a massive 10,000 credits if they can hit five in a row. The Avengers logo can also be found on the reels, acting as a scatter symbol. Find three or more anywhere on the reels, and you’ll win a prize worth as much as 100 times your spin bet!

Avengers Assemble: If you should manage to hit Captain America, Iron Man, Thor, Hulk and Nick Fury on the same payline in any order, you’ll earn yourself an Avengers Assemble bonus. You’ll immediately win 200 times the line bet as a result. Note that this bonus only takes place on normal spins.

Wall of Heroes: This bonus game is triggered if you should hit three or more of the Avengers logos anywhere on the reels in the same spin. You’ll be presented with 20 Avengers symbols laid out in a gird, and you’ll get to start picking logos to reveal hero icons. Once you’ve revealed three of the same hero, you’ll earn their free spins game! After those free spins, you’ll come back to the wall to try again. This feature only ends if you reveal a Loki symbol, which will take you back to the regular game.

The various free spins games you can unlock include the following:

• Captain America: Nine free spins, with a random multiplier of 2x to 5x on your winnings for each spin.

• Iron Man: Nine free spins, with a multiplier that starts at 1x but increased by one after every three spins. In addition, an extra wild is added to the middle position on the third reel for every spin.

• Thor: Nine free spins, with 0-5 random wilds added to the reels by Thor’s hammer after every spin.

Marvel Progressive Jackpot: This feature can be triggered by any spin, with the odds of getting into the progressive jackpot game being tied to how much you spent on a given spin. Once in the game, you’re presented with a grid of 20 squares, from which you’ll choose to uncover icons that relate to one of four jackpots: Power, Extra Power, Super Power or Ultimate Power. Once you uncover three of the same symbol, you’ll win the associated jackpot. That can range from a few hundred euros for the Power jackpot, up to potentially millions for the Ultimate Power jackpot!