Even if you’ve never read a comic book or watched a Marvel movie, you’ve almost certainly heard of Spider-Man. Created by Stan Lee in 1962, Spider-Man has become one of the most enduring and classic superheroes in the world. Today, he’s gone way beyond comic book culture to be the star of a seemingly endless number of movies, as well as the featured player in a new online slot machine by Playtech. 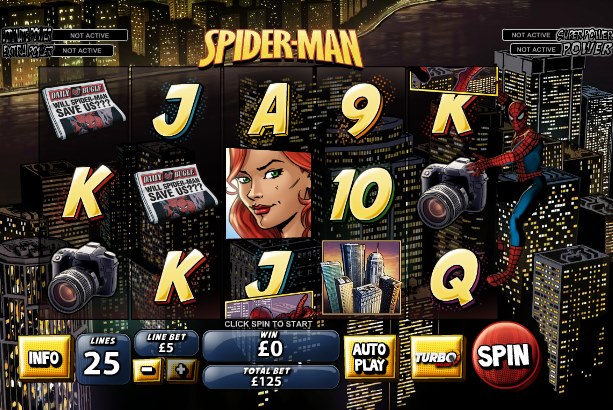 Spider-Man: Attack of the Green Goblin is a 25-line, five-reel slot machine that can be found exclusively at Playtech casinos. Players can control how much they spend on each spin by adjusting the coin value, with a variety of options available for high-rollers and budget-minded players alike. The game also takes advantage of Spider-Man’s comic book roots by using a very comic-like aesthetic, which is noticeable in everything from the opening credits sequence to the art style used throughout the game. Even the symbols themselves feel as though they could have been pulled from the pages of a comic book, and are framed like panels in a classic Spidey story.

The symbols in this game start with the classic playing card ranks, ranging from nine though aces. Of course, bigger wins can be found if you hit symbols that have to do with the Spiderman theme, such as the New York skyline, issues of the Daily Bugle, or various characters like Mary Jane and the Green Goblin himself. There’s also a Wild symbol that can substitute as a part of any winning combination, or earn you up to 10,000 coins if you can hit five of them in a row.

Spider-Man Wild Feature: On some spins, Spider-Man will appear to randomly shoot spider webs at the reels. This will turn up to four symbols wild for the next spin!

Spidey Snapshot Feature: Another random feature, this one sees Spider-Man show up by dropping down from atop the reels. A camera will then manage to snap a quick picture of our hero, earning you an instant bonus prize of between 3x and 10x the amount bet on that spin.

Spider-Man Collection Feature: What would a Spider-Man game be without some comic books? If you hit bonus symbols on the first, third and fifth reels on the same spin, you’ll be presented with a series of comic books on a shelf. They’ll rotate past the screen until you press a stop button, which will result in one of five special features being activated. Those features are as follows:

Ultimate Fight: This feature triggers a battle between Spider-Man and the Green Goblin. Uncover symbols to control the action, with the goal of landing successful strikes for Spider-Man. Each hit by Spidey will earn you a prize, and you’ll earn a bonus if he ultimately comes out on top in the fight!

City Chase: In this game, you’ll swing across the city to look for the Green Goblin, collecting prizes along the way. The game will continue until you reveal a “collect” symbol. However, there are also special bonuses along the way that can help you avoid the Collect symbols and reveal hidden prizes.

Hot Zone Free Games: This feature earns you 20 free spins. Occasionally, Spider-Man will throw a web that covers a square of four symbols to create a “hot zone,” freezing wilds there and turning Green Goblin into a 2x wild symbol.

Rivaling Free Games: Here, you’ll earn 10 free games. There’s no multiplier at the start, but each Spider-Man logo that appears on the third reel will stop the spin countdown, allowing you unlimited free spins. Another Spider-Man logo will increase the multiplier by 1x, up to a maximum of 5x. If a Green Goblin symbol appears on the third reel, though, the multiplier will be reset and your free spins will begin counting down again.

Radioactive Free Games: In this version of the free spins game, you’ll start with 15 spins. A special radioactive spider symbol will appear on reel three as a wild; when it appears, it will also cause a random spot on the second and fourth reels to become radioactive spiders as well.

Marvel Progressive Jackpot: This progressive jackpot game can be triggered randomly on any spin, though your odds of getting into this game depend on how much you’ve wagered. Once in this feature, you’ll win one of four major jackpots – perhaps even the Ultimate Power jackpot, which could award €1 million or more!