Victorious is a slot machine that celebrates the great military victories of the Roman Empire. More importantly to players, it’s a game that offers major rewards for hitting the right combinations of symbols, and makes it easy to hit those combinations by using the popular “all ways” system of betting, in which you make one flat bet to cover all possible winning combinations. While the game doesn’t feature any dramatic special bonus rounds, there’s plenty going on during the main game itself to make Victorious a great slot machine. 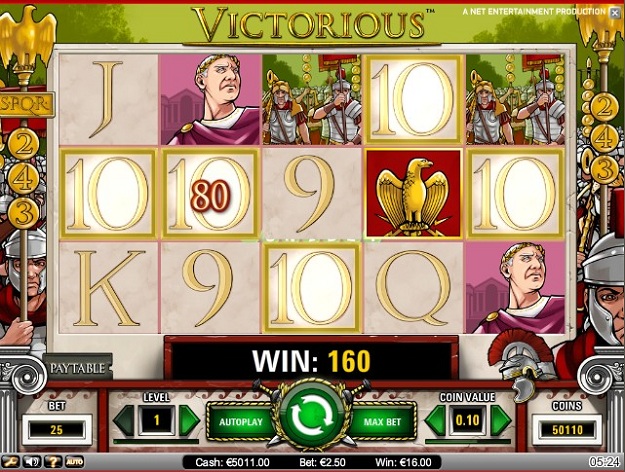 Victorious is a five-reel slot machine that can be found at casinos using NetEnt software. In Victorious, you won’t have to worry about how many lines to play, or how many coins to be per line. Instead, players are automatically granted the ability to win prizes if symbols show up consecutively on each reel running left to right, regardless of what position those symbols are in. This effectively gives you 243 different paylines on each spin. It’s worth mentioning that players are required to make bets of at least 25 coins, so a “Level 1” spin at a coin value of €0.01 will actually cost you €0.25. Players can wager at ten different levels, each of which increases the bet by 25 coins; at the full Level 10 betting level, you’ll be betting 250 coins per spin.

The object of Victorious is to match like symbols on consecutive reels, beginning with the first reel and moving towards the right. There are a total of ten different symbols you can win by matching, each of which offers unique prizes. The most valuable symbols are related to different parts of the Roman military hierarchy: emperors, generals, soldiers and legions. Smaller prizes can be won by matching symbols you’d find in a deck of cards, ranging from nines through aces. Most wins require matching three or more of the same symbol; however, hitting just two of the lowest-value symbols (nines and tens) will trigger a small win.

Gameplay is also enhanced by the presence of two special symbols. The first, the laurel wreath, works similarly to a scatter symbol, paying out prizes that are equal to a multiple of the amount you bet on that spin. However, you must still hit these symbols consecutively across the reels (unlike a true scatter, which would win regardless of where they appeared).

Victorious is a fairly straightforward slot machine. Other than the “all ways” betting scheme, there is only a single bonus feature: the Free Spins game. This online slot bonus round can be reached by hitting three or more laurel wreath symbols consecutively across the reels, starting from the first reel.

Depending on the number of these wreath symbols that you match, you’ll win between 15 and 25 free spins. During these free spins, all of your winnings will be tripled, greatly increasing the value of each prize. In addition, you can retrigger this bonus during the free spin round by hitting more wreath symbols; any additional free spins will simply be added to your total, and continue being used in the bonus round.

The largest payout in Victorious is won if you hit five emperor symbols in a row. This results in a prize of 1,500 credits. This is multiplied by the “level” you are betting at; at Level 10, that means you would win 15,000 credits for this combination. With a maximum coin value of €0.50, that means this prize can be worth as much as €7,500.

The presentation of Victorious is fairly simple, without any animations, music, or special graphics that stand out. However, if you’re a fan of the Roman Empire or just like the aesthetics of their culture, you’ll likely enjoy the art design in this game (and should also check out the Gladiator 3D slot from Betsoft Gaming). The illustrated graphics do a good job of capturing the glory of ancient Rome, including their distinctive columns, the sharp fonts, and the look and feel of their famous army.

Surprisingly, the attention to detail here is higher than you might expect for a slot machine. Chances are that a true expert on Rome could point out plenty of flaws in the details of armor or clothing, but the insignias, symbols, and abbreviations used throughout the game (such as the famous SPQR initials: Latin for “The Senate and People of Rome”) add a touch of authenticity to Victorious, which makes the machine all the more fun to play.