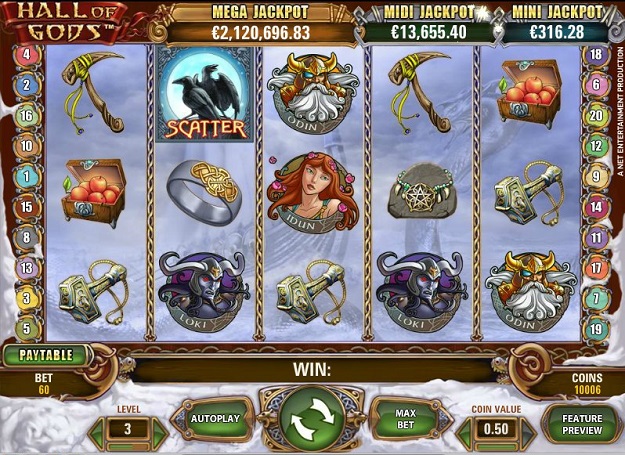 Hall of Gods Gameplay and Symbols

Hall of Gods has the same menu bar that features in many NetEnt slots, although it is decorated with the theme of the game, and set against the crisp Scandinavian snow. Players have the option of adjusting the value of their coins from €0.01 up to €0.50, and they can wager anything from 1 to 5 coins per line. The paylines themselves are not adjustable. Ultimately, your wager is going to fall somewhere between Hall of Gods’ €0.20 per spin minimum bet, and €50.00 per spin maximum wager, respectively.

Symbol-wise, the best paying icons in the game are those that feature the Norse gods themselves, including Idun, Loki, Freya, Thor and of course, Odin. Smaller wins can be had with the thematic icons, such as the chest of apples, a scythe, a pentagram necklace, Thor’s hammer, and a Norse ring. The progressive jackpots can only be won in the bonus round, though.

There are three special symbols in the Hall of Gods slot; namely the wild, bonus and scatter icons. The dragon’s head makes up the wild symbol. As a substitute symbol, it can replace all other icons in the game, save for the two other special symbols. Wilds can appear on the second, third and fourth reels, and will expand to cover the entire reel, when they are used to complete a winning combination.

Hall of Gods’ bonus round is where you can win one of the progressive jackpots. Bonus rounds can be triggered with any wager, although the more you stake, the better your chances of landing one of the jackpots.

In the bonus round, fifteen shields will appear on the screen. The player must smash the shields with Thor’s hammer to reveal prizes. Behind each shield is a scroll with either a cash total, or the Mini, Midi or Mega Jackpot icons. You can keep smashing shields until you match up three of the same icon. So, if you land three icons worth 200 coins, then this is what you’ll win. If you land three Mega Jackpot icons, you’ll win the top progressive. In the past, the Mega Jackpot in this slot has seen players win over €7.5m, whilst the smallest ever win was still over €600,000.