Dracula is an April 2015 slots release from NetEnt in cooperation with Universal Studios. This bat-tastic slot has 5 reels, 4 rows and 40 pay lines. It also has several bonus features including free spins, stacked symbols and stacked wilds.

This game is of course based around Count Dracula, who was created by gothic novelist Bram Stoker in 1897 and who has been busy puncturing dainty necks ever since. This slots game features Dracula in his younger days, as he mopes around the streets of an unnamed town clad only in a muscle vest and trousers. It’s his job to hunt for pretty young maidens to scare the bejesus out of, and it’s your job to hunt around for tasty cash jackpots. 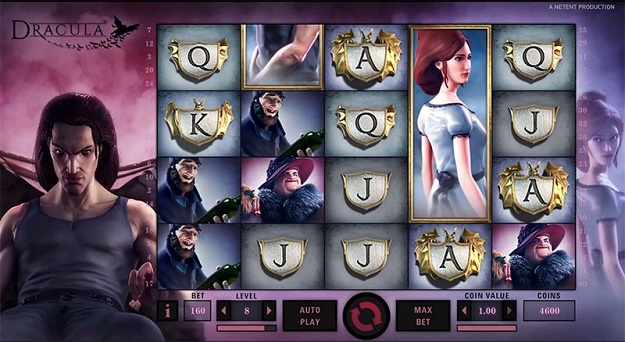 The symbols in this game are our blood-loving hero, one of his sexy victims, and three other characters who look as if they about to be nibbled upon. Also making their usual appearance are playing card symbols, this time from jack to ace.

You coin value is of your choosing, from 0.01 to 1.00. All forty lines are in play at all times, and your coin value is automatically multiplied by twenty because of this. You can also choose a ‘bet level’ multiplier from one to ten to ramp up your stake a little more. The higher your stake, the higher the payouts. Your minimum bet is 0.20, and your maximum is 200.00.

You win a pay out in the usual way – by landing at least three identical symbols in sequence on one of the pay lines from the left hand reel onwards. All of the symbols in this game come stacked, giving you more chances of winning. Dracula shows his displeasure whenever you do raid his coffers by baring his fangs at you.

Payouts commence at 5x your bet-per-line for three identical playing card symbols up to 200x for five of Dracula or his lady friend.

Once you’re happy with your setting, hit the ‘spin’ button and release Dracula to attend to his blood-lusting ways!

Dracula Wild Symbol: The wild symbol is simply the letter ‘W’ and appears on the middle three reels, but only in main play. It substitutes for all other symbols.

Stacked Wild Symbol: The stacked wild symbol appears on the central reel during free spins only and substitutes for all other symbols. It contains an image of Dracula and his lady friend, and is stacked three rows high.

If, during free spins, the stacked wild symbol appears complete on the central reel, then you win yourself an additional two free spins.

Dracula Bat Feature: The Bat feature occurs randomly during the main game, and on every spin during free spins. When triggered, Dracula will dissolve into a cluster of bats, which then fly over the reels and land in formation on the reels themselves. Each symbol that a bat lands upon is then turned into the same, identical symbol (including the wild symbol) with the possibility of triggering really big wins.

This jugular-puncturing game has amazing graphics well up to NetEnt’s usual standards, and has been designed to trigger lots of smaller wins instead of one big win. It is though entirely possible to turn the majority of the reels into the same symbol, which can cause some really humungous payouts.

The best feature is free spins with the bat feature being triggered before every spin. Should the bats feel really generous and transform most of the playing arena into the same symbol, there’s a real chance of scoring a sizeable amount of cash. Dracula comes highly recommended – just make sure you load up with garlic before you commence playing!