South Park Reel Chaos is a sequel from Net Entertainment following on from the huge success of their original South Park slot machine which was released at the end of 2013. This time NetEnt set the slot in the evening time and used the superhero versions of the characters, as seen in season fourteen of the hit show, as symbols on the reels. Just like its predecessor, South Park Reel Chaos is loaded with bonus features including Wilds, Respins, Multipliers, and Free Spins. Even if you aren’t a fan of the show, a mouth watering maximum win of 650,000 coins is available! 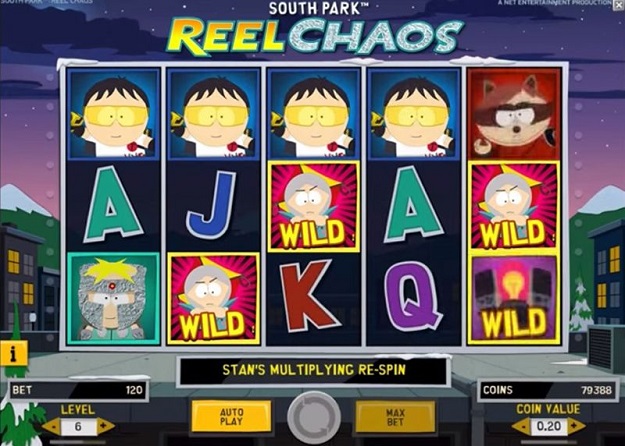 With the slot being based around the superhero alter egos of the clan in the fourteenth season, NetEnt have cleverly designed the character symbols in this style too. The five main characters in the slot who feature as symbols are Professor Chaos, Cartman as Coon, Kenny as Mysterion, Stan as Toolshed, and Kyle as the Human Kite. There are also Wild symbols which substitute for any others except for Bonus symbols and the only other symbols in the game are the 10 to Ace playing cards. It is Professor Chaos who is the highest paying symbol in the game with five of him worth 1,000 coins while the lowest paying is the 10 playing card with five of it worth just 40 coins in comparison.

Cartman’s Stacked Wilds: This feature is randomly triggered during the base game and actually occurs very frequently. This sees General Disarray appear on the reels being chased by Cartman, creating stacked wilds along the way as they climb up or slide down the reels.

Kenny’s Multiplier: This feature is also randomly triggered during the base game and it sees Kenny fighting with Professor Chaos, with you being rewarded with a 3-5x multiplier for that specific spin.

Stan’s Multiplying Re-Spin: This feature can be randomly triggered after a spin which doesn’t bring a win and sees handyman Stan repair the reels with power tools. The reels are then respun until you land a win, with a multiplier ladder increasing each spin it takes, ranging from 2x to 10x, so the longer it takes to land a win, potentially it will be more lucrative.

Kyle’s Overlay Wilds: Again, this is a feature which is randomly triggered during the base game and sees Kyle use a laser to clear the reels of evil minions. Three to five overlay wilds are then placed on the reels which always leads to very handsome wins!

Mintberry Crunch Epic Bonus Spins: This is the games main bonus feature and is triggered by landing three bonus symbols anywhere on reels one, two and three. The feature sees Mintberry Crunch battle against four enemies (General Disarray, Evil Minions, Anime Professor Chaos and standard Professor Chaos) with health meters displayed on screen and for every enemy defeated you are rewarded with an increased multiplier, up to a maximum of 4x. Should Mintberry Crunch defeat all four enemies, you are further rewarded in the form of a Victory Bonus.