Go Bananas is one of the quirkiest slot machines to be released by Net Entertainment in some time. It is an animal themed slot that features various types of Monkeys which are animated on the reels performing crazy actions after large winning combinations – quite simply going bananas! Some players will be disappointed at there being no free spins mode, but the Wild Monkeys feature is exciting and very rewarding – plus Go Bananas contains a maximum win of 140,000 coins! 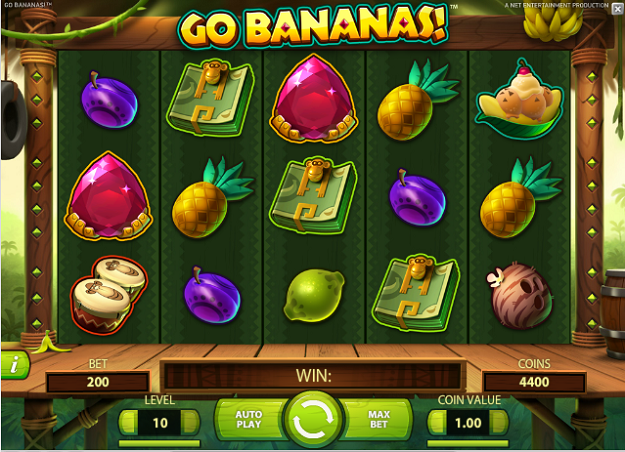 There are numerous symbols in Go Bananas, but the main ones are the five different types of Monkeys (which are all Wilds). The five types of Monkey you will be presented with on the reels are a Gorilla, Urangutan, Baboon, Langur, and Tarsier. The other symbols you will encounter are a Gem, Monkey Totem, Money Money Clip, Djembes, Banana Sundae Dessert, Orange, Pineapple, Coconut, Lime, and Plum. Aside from the Monkeys it is the Gem which is the highest valued symbol, with five of them being worth 700 coins, while the lowest valued symbol is the Plum and five of those will result in a mere 30 coins being awarded.

Sadly there is no free spins mode or second screen bonus games in Go Bananas, however NetEnt have more than made up for that with their Wild Monkeys feature. When any of the five Wild Monkey symbols (Tarsier, Langur, Baboon, Urangutan, or Gorilla) appear on the reels, the symbols around them will turn Wild depending on the specified pattern attached to each of them.

Wild Tarsier – Rewards you with a total of two Wilds which will appear either vertically or horizontally.

Wild Langur – Rewards you with a total of three Wilds which appear together horizontally.

Wild Baboon – Rewards you with a total of three Wilds which appear together vertically.

Wild Urangutan – Rewards you with a total of four Wilds which appear together as a square.

Wild Gorilla – Rewards you with a total of five Wilds which will appear in the shape of an X.

This is an incredibly rewarding feature. When we played the game before writing this review we enjoyed back to back wins of 6,100 and 1,500 coins thanks to the Wild Monkeys. We noticed that there is often periods of zero or low value wins of 1x or 2x, but then the Wild Monkeys often land on back to back spins and really boost your bankroll.

While this isn’t a blockbuster slot, it is certainly a welcome addition to the range of NetEnt slots currently available and one you should have a few spins on. It is fun and quirky with the various types of Monkeys appearing on the reels performing various actions, plus the Wild Monkeys offer opportunities for very big wins!