Subtopia is a NetEnt slot that takes players on an undersea adventure. You’ll explore a lost city under the ocean, meeting interesting characters and finding plenty of treasures along the way.

While Subtopia doesn’t include a large number of special features, and there are no second screen bonus rounds, that doesn’t mean that the game isn’t fun. Instead of frills, Subtopia allows its features to focus on what most players really care about: winning you even more cash. This means that the game is loaded with multiplier features, which allow your winnings to suddenly increase by as much as six times their normal value. While it might be short on fancy graphics or flashy features, the opportunity to suddenly win a gigantic prize on any spin through random multipliers makes Subtopia a thrilling online slot machine. 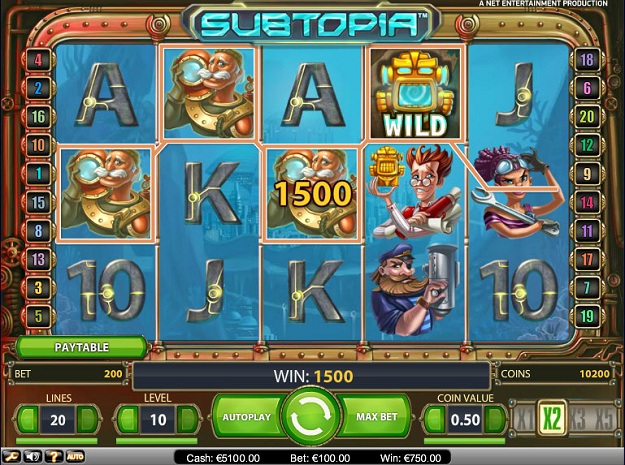 How To Play Subtopia

Subtopia is a 20-payline, five-reel slot that can be played at Net Entertainment casinos. The game allows players to wager up to 10 coins on each line, with coin denominations ranging from a penny to half a dollar (or half of the denomination unit of your choice). This makes it possible to wager as much as $100 on a single spin, if you so desire.

The object of the game is to match identical symbols across your active paylines, with only combinations beginning on the first reel and running consecutively left-to-right counting as wins. The symbols used in this game are generally simple: the lower-value symbols are represented by stylized versions of the classic poker ranks (tens through aces), while bigger wins can be scored by matching some of the characters from the game’s story. In total, there are ten different symbols you can match for instant wins, with at least three-of-a-kind needed to win in all cases.

In addition, Subtopia also features the classic wild and scatter symbols. The wild symbol is clearly marked, and substitutes for any of the standard symbols (but not the scatter or special feature symbols). The scatter symbol is a compass, and automatically wins a prize based on the total amount you wagered on that spin if you hit two or more anywhere on the reels.

There are two notable special features in Subtopia. First, hitting three or more of the scatter symbols will trigger the always popular free spins game. When this occurs, you’ll get the opportunity to enjoy some free spins that can win you cash without risking any of your own money. In addition, a Multiplier Meter will appear on screen for some of these spins, randomly increasing your winnings by a factor of 2x to 6x.

Next up is the Random Multiplier feature. This feature can instantly change the amount you’ll win on any given spin. You’ll notice the meter for this feature on the bottom-right corner of the screen. For most spins, it will stay at the lowest setting of “x1,” indicating that you’ll be winning prizes at normal levels. However, some spins will see this meter randomly move to x2, x3, or x5, multiplying any wins on those specific spins by the given amount.

If you want to score the big wins in Subtopia, there are two ways to go. The first is to land some of the higher-value character symbols, such as the red-haired scientist. He’s worth 2,000 credits per coin wagered if you can manage to land all five of him on a single payline – up to 20,000 credits if you’ve wagered the full ten coins per line.

Another route to riches is hitting a large number of the scatter symbols. These symbols pay out based on your total bet for the spin, so the more you bet, the more you can potentially win. With a 100x payout if you hit five scatter symbols, and the ability to wager up to 200 coins on a spin, that gives you another way of instantly earning 20,000 credits. Of course, all these wins also have the potential to grow even larger thanks to the multiplier effects built into the game.

Theme and Presentation in Subtopia

Subtopia takes place in an undersea world, and both the graphics and sounds are designed to accentuate this theme. While the characters in the game are human, they’re all clearly from a world that lies beneath the surface: there are deep sea diving suits, submarines, and plenty of other signs that we’re not walking on land. The backdrop for the game is a mysterious underwater city that seems like something out of the stories of Atlantis, and the bonus features and symbols are all designed to look as though they came straight off an underwater vessel. The graphics and animations aren’t out of this world, exactly, but they are sharp and more than get the job done.