Aliens is a super-spooky 5-reel 15-pay line online slot from NetEnt in co-operation with 20th Century Fox. This game is based on the 1986 movie of the same name, in which a team of space marines travelled to a far-away colony and met up with scores of ETs whom definitely were not very friendly.

Aliens was a terrifying sequel to Alien, a 1979 movie that starred John Hurt, Ian Holm, Tom Skerritt and Harry Dean Stanton, plus, of course, Sigourney Weaver as Ripley. The cast of seven played the crew of a space-based oil processor which they set down on an alien world to answer a distress call. They picked up a very unwelcome stowaway who then proceeded to have everyone except Ripley and Jones (the cat) for dinner. 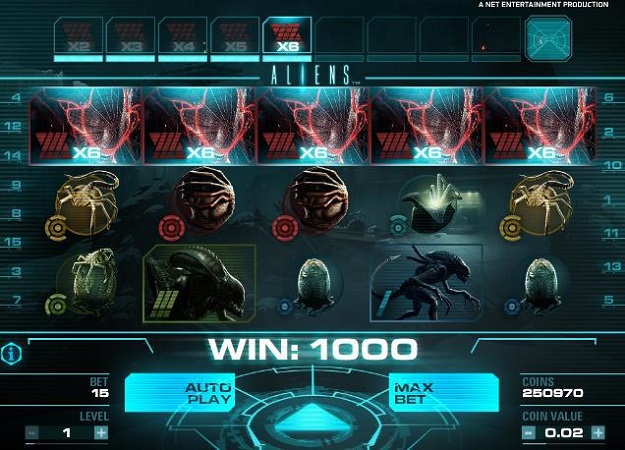 The game starts with a very cool video intro that depicts a drop ship making its way down to the terra-forming (or should that be terror-forming?) base which the alien nasties have used as free buffet. The video ends with a nice ‘hello’ from one of the ‘xenomorphs’.

The symbols in this game are all depictions of the aliens in their various life-cycle stages – egg, face-hugger and full-sized nasty.

You win pay outs by lining up at least three identical symbols in sequence from the left-hand reel on one of your active pay lines. The lowest pay out is 5x your bet-per-line for three egg or face-hugger symbols. The highest is 1,000x your line wager for five big red xenomorphs.

Once you’re happy with your settings, hit the light blue spin button. Try not to hide behind the sofa while the reels are spinning.

Aliens Wild Symbol: The Weyland-Yutami Corp logo acts as the wild symbol. Weyland-Yutami were the company who sent Ripley and her crew to investigate the distress call in the first place with the chilling message to Ash, their android agent, of ‘crew expendable’. The wild symbol substitutes for all other symbols.

Aliens Level 1 – The Search: In the basic level of the game, there is an ‘Alien Activity Meter’ above the reels. Each time you score a winning line of aliens, they are added to the meter, which also awards you a multiplier. Every non-winning spin lowers the meter by one. If you manage to get the meter all the way to the tenth symbol, then you go through to level two.

Aliens Level 2 – The Encounter: At level two things really start to get scary as you watch a marine travel down a long, dark tunnel shooting face-huggers. Each round he clears guarantees you a win of at least three symbols, which triggers another spin in which you can win more. If he runs out of ammo though, he gets a nice smacker from a face-hugger! Keep your fingers crossed that he makes it all the way to the hive, which triggers level three.

Aliens Level 3 – The Hive: Here your unlucky marine get a personal encounter with the Alien Queen. The more damage the marine manages to achieve before he gets a good old-fashioned munching, the more money you win.

There’s certainly a lot going on with this slot, and at times it does seem to be a little too complicated for its own good as it can be difficult to understand what just is happening once you progress beyond level one.

Graphically, it’s definitely one of the best slots out there, and for genuine thrills, try playing it in the dark. Just remember, when you win big on slots, everyone can hear you scream!