By far, the most exciting slot machine in the Net Entertainment lineup is Mega Fortune. This slot game features one of the largest progressive jackpots in the world of online gambling, and in 2011 paid out a staggering €11.7 million to a Norwegian student. While the slot machine itself is certainly a solid, fun game in its own right, this slot is designed to appeal to jackpot hunters who want to win a life-changing amount of money. 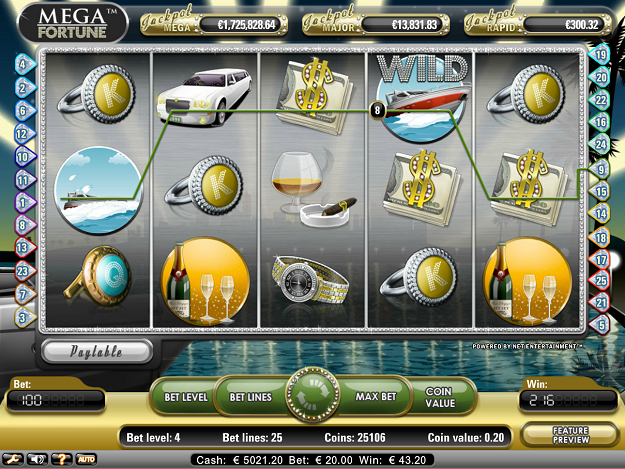 The object of the game is to match like symbols across your active paylines running left to right. The eight basic symbols that you’ll see most often on the reels are all designed to evoke a feeling of luxury: gold and silver rings, watches, money clips and stretch limousines. In most cases, you’ll need to hit at least three of the same symbol in a row to win a prize.

In addition, there are three special symbols which have additional effects during gameplay. As in most slot machines, there is a wild symbol – in this case, a speedboat. This symbol can substitute in a winning combination for any of the symbols mentioned above. Alternately, the wild symbol can create its own winning combinations if you match two or more on the same payline.

Another classic symbol that makes an appearance in Mega Fortune is the scatter symbol. In this game, a bottle of wine serves this role. To win a prize with the scatter symbol, you’ll only need to match two or more scatter symbols anywhere on the reels. Unlike other prizes, the scatter prizes are based on the overall size of your bet on that spin. For instance, hitting three scatter symbols will win you a prize equal to three times your total wager.

Finally, there’s also a bonus symbol that you’ll see making the occasional appearance on the reels. This bonus symbol is critically important, as it can help you reach the bonus round – one in which you can win enormous rewards.

There are two special features that can be activated while playing Mega Fortune. The first is a free spins game that is activated any time you hit three or more scatter symbols anywhere on the reels. During these free spins, you’ll randomly be assigned a multiplier of 1x to 5x which will apply to your winnings during the free games. If you see two or more scatter symbols on any spin during this bonus round, you’ll trigger additional free spins.

The more exciting bonus round is triggered whenever you hit three or more bonus symbols consecutively across any active payline. This activates the Mega Jackpot bonus round, in which you’ll get one spin on the Mega Jackpot wheel – a chance that could make you an instant millionaire.

Here’s how the bonus game works. You’ll see three different wheels, along with a central button that reads “Mega Jackpot.” On the outer wheel, half of the symbols offer players small prizes, ranging from 100 to 300 credits. The other half feature arrows pointing inward. Hit an arrow, and you’ll trigger the second wheel to spin.

On this second wheel, the prizes get somewhat larger – ranging from 300 to 700 credits. You’ll also find two spaces marked Rapid, which instantly reward the smallest of the three jackpots in this game: the Rapid Jackpot. Additionally, there are four arrows out of the 24 spots on this wheel that point inward to the third and final reel.

This final reel offers huge prizes to players. The normal rewards range from 2,500 credits to 7,500 credits. In addition, one of the 12 spots on this wheel contains the word Major, and awards the Major Jackpot – a prize usually worth several thousand Euros. In addition, there is one arrow on the wheel. Hit this one, and you’ll move to the center the wheels, instantly earning the Mega Jackpot, worth millions of Euros!

Obviously, the biggest payout possible in Mega Fortune will come from the Mega Jackpot, which we’ll talk about more in the section below. However, there are some other very nice prizes that can be won more conventionally on the reels.

Of the standard symbols in this game, the largest prizes come from the limousine symbol. Hit five of these on the same payline, and you’ll win a prize worth 1,000 credits per coin wagered. But this prize is nothing compared to the reward you’ll receive should you get five wild symbols to appear on the same line; this combination is worth a massive 10,000 credits.

By far, the most attractive feature in Mega Fortune is the opportunity to win the legendary Mega Jackpot. This prize regularly grows in size to be worth several million Euros, and, on at least one occasion, has been worth over €11 million – making it one of the most popular progressive slots online.

In September of 2011, a Norwegian student returned home from a night out at the movies to find that he had an offer for ten free spins on the Mega Fortune slot machine. A Betsson customer (check out our review of Betsson Casino), this student normally bet on sports, but decided to try out the machine rather than waste the few spins.

The ten free spins came and went, with the player winning a few small prizes along the way. He then decided to press his luck, spending those winnings on a few €0.50 spins to see what would happen. Sure enough, the player managed to trigger the bonus round. As the wheels locked into place one after another, he soon realized he had won one of the largest prizes in online casino history. The lucky young player had just won a jackpot of €11.7 million – all courtesy of a few free spins.

While this is the largest jackpot ever hit in Mega Fortune, it is far from the only one, as other players have won jackpots as large as €6.8 million on this machine. If you’re seeking out a large jackpot that has proven that it can be hit, we recommend checking out Mega Fortune and taking a shot at your Mega Jackpot today!