Most people are at least somewhat familiar with Arabian Nights, the collection of Middle Eastern stories originally titled One Thousand and One Nights. While you might not be able to name any of the stories that are in the collection off the top of your head, you’ve certainly heard of them in other media: Ali Baba and the Forty Thieves, Sinbad, Aladdin’s Lamp, and others have been retold extensively around the world.

The Arabian Night’s slot machine pays homage to these legends, while also creating a new legend of its own. While you’ll see some of the classic symbols from the Arabian Nights stories on the reels, there’s a hidden gem unique to this game: a jackpot that could make you an instant millionaire. 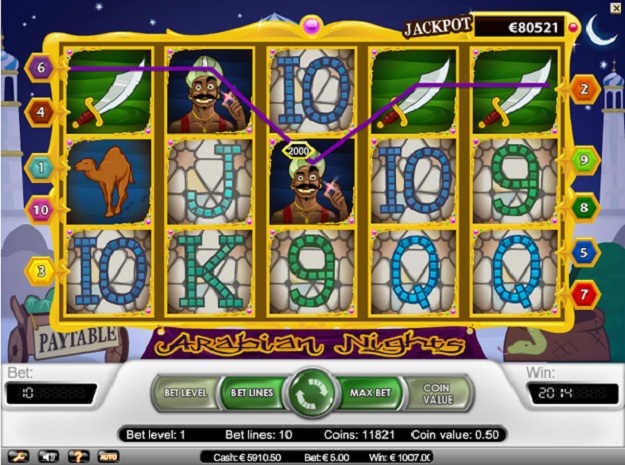 Arabian Nights is a five-reel, ten-line slot machine which is available at NetEnt casinos. Unlike many NetEnt slots, players can only bet a single coin per line. However, you do have the choice of how many lines to play. In addition, there is only one coin value available (€0.50). This means the maximum bet is just €5 – not much when you could possibly win millions on this slot game, depending on the jackpot amount!

As always, the object of the game is to match identical symbols in order to win prizes. All matches must be made from left to right across the reels consecutively in order to score wins. In total, there are ten symbols that you can try to match: five classic poker rank symbols (nines through kings), as well as classic Arabian symbols such as camels, tents, and scimitars.

In addition, there are two special symbols that you might want to keep an eye out for while you play. First, the lamp symbol acts as a scatter symbol; hit two or more of these symbols anywhere on the reels during a spin, and you’ll instantly be rewarded with a prize equal to a multiple of your wager for that spin.

Another important symbol is the Arabian man, who acts as a wild symbol. He can substitute for any other symbol as part of a winning combination (with the exception of the scatter symbol). In addition, any winning combinations made using the wild spin are doubled. The wild symbol can be used on its own to score some very large wins, making it a very valuable icon to see on your screen.

While Arabian Nights is a very popular slot machine game, it’s not due to the game’s bonus rounds, which are sparse. In fact, there’s only one special feature: a free spins game. You can earn 15 free spins by hitting three or more of the lamp scatter symbols during any spin. As an added bonus, all winning combinations during these free spins will pay out at triple their normal rates (except, of course, for jackpot wins).

But while this game might not have a whole lot of special features, it’s certainly generous when it comes to major payouts on the reels. The biggest standard prize comes from hitting five scimitars; that’s a combination worth 2,000 coins, or €1,000.

However, that’s just the beginning for the large prizes in this game. If you should happen to hit five wild symbols on the same payline, you’ll score a win of 10,000 coins (€5,000). But if you were smart enough to choose to play this game for the maximum bet – in other words, playing all ten lines – five wild symbols will instead pay the full jackpot amount.

Arabian Nights is viewed by players as one of the best progressive slots to play at because a max spin only costs €5 and the jackpot can be as large as millions, especially if it hasn’t been hit in several months. Regularly paying out over €1 million, one recent winner hit the Arabian Nights jackpot on November 25, 2011. This 52-year-old Swedish woman won a jackpot of €1.9 million playing at Mr. Green Casino – a typical jackpot for this slot. In 2010, one player won €4.8 million in this jackpot – at the time, the largest in Betsson Casino history.

Arabian Nights uses a classic, if basic, Arabian motif. The graphics are very simplistic illustrations, and there are no animations and no real music that you’ll hear during the game. Instead, the accompanying sound during gameplay features noises you might hear at night: crickets chirping, and the occasional owls hooting. I’m not sure if these are sounds that one immediately associates with the game’s theme, but it works nonetheless. Overall, while the theme isn’t anything exciting, it doesn’t detract from the gameplay experience either — and since you’re probably really playing this machine for a shot at the jackpot, that’s really all that’s necessary in this case.