Demolition Squad is a cartoon-style 5-reel 40-pay line online slot from NetEnt. This is a game with a unique and original theme as a group of wild and wacky-looking characters gather around a demolition site with the intent of performing as much (legal) damage as they can muster.

The game has some very nice features, including wild and scatter symbols and free spin bonuses. 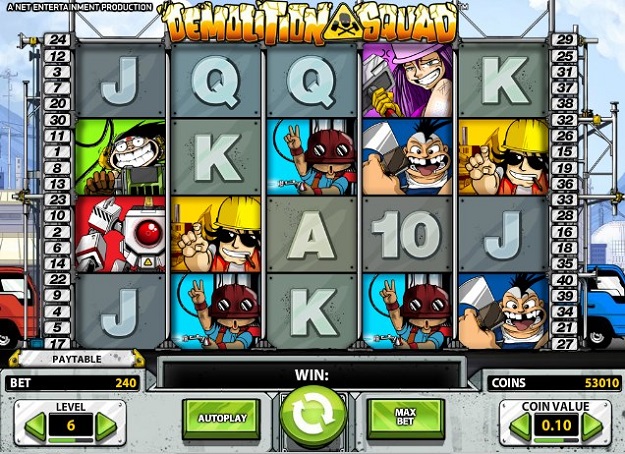 The symbols used in this game are the playing card values ten to ace, and the six members of the demolition squad themselves from an axe-wielding maniac to a very aggressive looking red-eyed robot.

There are a grand total of 40 pay lines, and this slot is one of those that has four rows as opposed to the usual three. All 40 of those pay lines are in play at all times.

You can choose your own coin size from 0.01 to 0.50, and the level of your bet (basically, the number of coins you want to gamble on any one spin) from one to ten. Your final wager is always your coin size multiplied by your bet level multiplied by forty. This makes the minimum value spin you can pay for as 0.40, and the maximum 200.00.

The more you wager of course, the more you will win if you earn yourself a cash payout, which you do by landing at least three identical symbols in sequence from the left-hand reel.

Cash payouts start at 5x your bet-per-line for three tens, and run up to the jackpot of 4,000x for five of that freaky-looking red-eyed robot that was mentioned earlier.

You start each spin by selecting your bet level and coin value and then hitting the central spin button. Then cross your fingers and hope the reels land lucky for you!

Demolition Wild: The Demolition Wild symbols appear on reels two and four, and your aim is to land them on those reels at the same time following a spin. If you succeed, then any ‘normal’ symbol that appears between them is ‘demolished’ to make way for a new wild symbol. Any wins are then scored with these wild symbols substituting for all other symbols aside from the scatter symbol.

Scatter Symbol: A yellow warning triangle acts as the scatter symbol, and appears on all five reels. If you manage to land three scatter symbols anywhere on the reels, you win yourself three free spins. If you land four, you win twenty free spins, and if you land five it’s the biggest bonus of fifty free spins.
To add to the bonus bonanza, any wins you land during free spins are multiplied by three.

This NetEnt slot looks great – it has a kind of Japanese ‘manga’ theme, but for a NetEnt slot, it’s a little lacking in playability. Having four rows instead of the habitual three really does raise your chances of winning cash payouts though, as does the forty pay lines and the ‘Demolition Wild’ symbols.

The disappointing thing about this slot though is the lack of graphical interaction, which causes it to pale in comparison to other NetEnt slots, the majority of which are pretty amazing. You’d think with a name like ‘Demolition Squad’ there’d at least be a wrecking-ball style bonus game, but nothing doing. If you want to ‘demolish’ some spare time though, then this game is at least one option.