The Terminator 2: Judgement Day movie was an instant blockbuster, released back in 1991 as a sequel to the original Terminator from 1984, and now Microgaming have added it to their long list of movie-themed slot machines. The Terminator 2 storyline revolves around an advanced Terminator (T-1000) who is sent back in time to kill ten year old John Connor to stop him from leading a resistance against the machines, with Arnold Schwarzenegger playing the part of T-800 (an older and less advanced Terminator) who is sent back in time to protect John and his mother Sarah.

Microgaming have made the Terminator 2 slot machine a blockbuster in its own right with characters used as symbols which then transform into clips from the actual movie and several rewarding bonus features including an amazing free spins mode which pays 1,024 ways! 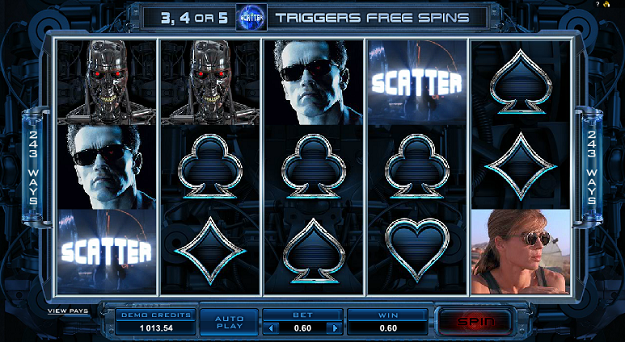 The Terminator 2 slot machine uses the popular 243-ways format which we are so used to seeing from Microgaming for their biggest releases and was also the format in the Avalon 2 and Immortal Romance slots. Once the slot machine loads you can select the amount of coins you would like to play for (between 1 and 10) as well as the value of each coin (0.01, 0.02, 0.05, or 0.10) meaning Terminator 2 can be played for as little as 0.30 up to a maximum of 30 – perfect for players of all budgets. The slot also contains a great Auto Play function which allows you to let the slot play while you do something else. There are preset options of 10, 25, 50, 100, until it stops, or a custom number of spins and you can choose for the slot to stop playing if it lands a big win.

As with all of their licensed slot machines, Microgaming have incorporated the characters from Terminator 2 onto the reels as symbols and even included clips from the movie. The most basic and least valuable symbols on the Terminator 2 slot machine are the card symbols, though unlike most games where it’s the 10-Ace values, in Terminator 2 it is the suit values of Club, Diamond, Hearts and Spade. The five character symbols are really what makes brings the Terminator 2 to life with T-800, Sarah Connor, T-1000, John Connor, and Arnold himself as Terminator who is the highest value symbol, all displayed on the reels. There is also a Scatter (used to trigger the free spins mode) and the T2 logo (which acts as the games Wild).

Free Spins Mode: This is where the big wins come from on the Terminator 2 slot machine, with the potential of up to 880,000 coins to be won. The free spins feature is activated simply by landing three or more of the Scatter symbols and you will be awarded a total of ten free spins. The most interesting aspect of this feature though is that the slot transforms into a 5×4 grid (an extra row is added) and it plays as a 1,024 ways slot machine for the duration of your free spins. As if this wasn’t generous enough, the T-1000 symbol also substitutes for all of the other characters during your free spins – meaning lots of big wins are up for grabs!

T-800 Vision Feature: This sees T-800 special vision feature incorporated into the slot machine. The reels turn red and T-800 will scan all of the symbols on the reels searching for character symbols, rewarding you for each one displayed on the reels. If you land one Scatter symbol during this feature you will also activate the free spins mode.

T-1000 Transformation Feature: This is the most recurring feature in the Terminator 2 slot machine and it sees the T-1000 symbol transform into the other character symbols to give you the largest payouts possible.