There had been a massive amount of speculation and anticipation surrounding the Avalon II: The Quest For The Grail slot machine since Microgaming announced it was in development. This level of anticipation was on the level of The Dark Knight Rises slot, and now that Avalon 2 has been released it certainly lives up to all expectations, proving to be a massive hit amongst players.

Of course, this is a sequel. Microgaming first released the original Avalon slot machine in 2006 and it was also a mighty success, leading to a mobile version release in 2010, and then a multiplayer version in 2013. This time Microgaming bring players a slick video slot which is packed with bonus features – a total of ten to be precise, and you can learn all about them in our review below. 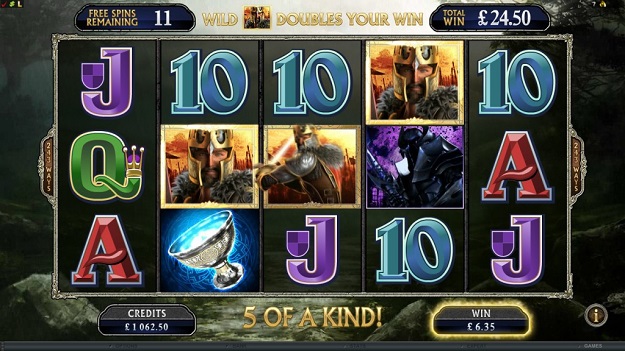 The storyline of the Avalon II: The Quest For The Grail slot machine is that you are helping King Arthur retrieve the grail and return it to Avalon. The Avalon II slot machine contains 5 reels, 243 paylines, and can be played from as little as 30p per spin up to a maximum of £7.50 if you choose to play for the maximum option of 150 coins. It features incredible graphics, an exciting soundtrack, and is jam-packed with incredible bonus features which will see you land big wins.

Apart from the Grail Bonus Quest there are two other exciting bonus features in the Avalon II slot. The character Merlin from the movie randomly appears on screen to reward you with a multiplier or cash bonus. If he appears on a non-winning spin you will be given a random prize worth between 4x and 20x your stake, whereas if he appears after a winning spin you will enjoy a multiplier bonus worth between 2x and 4x. There is also an Expanding Wild feature which once again brings some very lucrative wins. For this feature you simply need the wild symbol to land in the center of reel three and it will then expand and give you even more wins!

There are a total of eight parts to the Grail Bonus Quest with free spins, cascading reels, and pick me games all featured. Below you can learn more about each individual bonus feature found in the blockbuster Avalon II slot.

Lake of Legend – This bonus features sees you tasked with restoring Excalibur by collecting all of the different broken sword fragments and connecting them together again. To do this you will roll a dice ten times and if the dice number rolled matches the number attached to a specific fragment of the sword, it will then move into the reforged area. If you manage to completely restore it you will be rewarded with 15x your stake as a bonus on top of the other wins, and remaining rolls will have a 6x multiplier attached to them.

Misty Vale – The Misty Vale bonus feature sees you rewarded with 15 free spins and given the option of selecting one of the character symbols to act as an extra wild (with a 2x multiplier attached).

Whispering Woods – This feature is a click me game which will see the White Knight give you the option of selecting one of five shields. Each shield contains a multiplier amount with the lowest being 10x and the highest being a whopping 160x multiplier.

Forest Falls – The Forest Falls bonus feature often proves to be very lucrative. It sees you rewarded with 20 free spins with a 1x multiplier but contains a Trailing Wild feature. This is the Avalon II symbol and if it lands on row 1 or 2 on the reels it will expand downwards and hold for one spin which usually results in a large win.

Dusky Moors – Again this is a pick me bonus game which will see you presented with 12 items on the screen and your job is to match two helms of the same type and each helm has a multiplier ranging from 6x to 20x.

Hall of Shadows – The Hall of Shadows bonus feature sees you go to battle with the Dark Knight to recover the grail. You are given the option to block his attack or to launch an attack of your own, and depending on the outcome of each choice are rewarded with a cash prize.

Isle of Avalon – The final bonus feature of the Grail Bonus Quest is the Isle of Avalon. Here you are faced with a wheel which is somewhat similiar to NetEnt’s Mega Fortune slot. The aim is to get the highest multiplier possible and there are four reels on the wheel, however reel four can only be unlocked if you land a zero on the third reel. This is a very rewarding feature which often sees players land massive wins!