When you strip everything else away from a slot machine, what’s the real reason we play? There’s one big goal for every slots player: to win a huge jackpot that forever changes their life. That’s the idea behind Mega Moolah, a Microgaming slot machine that offers some of the biggest jackpots in all of online gambling. While there’s an African animal theme and some other big prizes on the reels, there’s no doubt that you’ll be playing this game for one reason, and one reason only: to win the enormous random jackpot that has the potential of being hit on any spin. 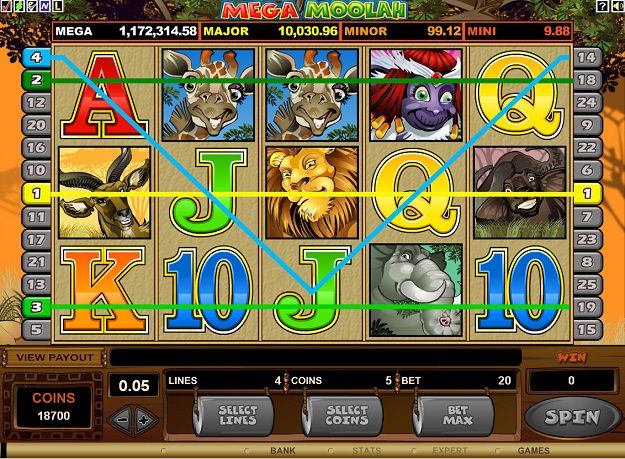 Mega Moolah is a 25-line, five reel slot machine that can be found at all Microgaming casino sites. While the game is best known for its progressive jackpot, there is also a standard slot machine here as well, in which you’ll have to match symbols from left to right across your active paylines in order to win prizes. You’ll have the opportunity to wager up to five coins per line, with coin sizes ranging from $0.01 to $0.05.

In Mega Moolah, you’ll usually need to hit three or more of the same symbol to score wins. The smaller prizes are attached to the classic poker rank symbols, ranging from the lowly ten to the fairly valuable kings and aces.

Bigger prizes are reserved for African wildlife. Antelopes, giraffes and elephants are just a few of the exotic animals you can match in order to win larger prizes, with elephants and hyenas even awarding small prizes for matching just two of a kind. The elephant is the most valuable of the standard game symbols, rewarding players with up to 750 credits per coin wagered.

Mega Moolah also features a wild symbol and a scatter. The scatter is a monkey, which we’ll talk about a little more below, as it activates one of this game’s two bonus features. The wild symbol is a lion, which can substitute for any of the normal symbols in the game to help make winning combinations. As an added bonus, if your winning combo includes a lion, you’ll see your prize money doubled for that line. The lion is also valuable in his own right, as he can make his own winning combinations if you match at least two lions on the same payline. In fact, five lions on a single line pay out the largest prize of all: 15,000 credits for each coin you wagered. If you’ve bet the maximum number of coins at the highest denomination allowed, that means you can win up to $3,750 on a single line. That may not be quite to the standards of a major jackpot, but it’s still a very hefty prize for a nickel slot.

One area in which Mega Moolah doesn’t stand out is in the special features you’ll find in the game. Of course, there’s the opportunity to win the random progressive jackpot at any time, but we’ll be covering that game later.

Besides that, there’s also a bonus game attached to the monkey scatter symbol. Hit three or more of these monkey symbols and you’ll win a total of 15 free spins. Not only can you win prizes without risking any money, you’ll also see all of your winnings tripled during these free spins!

We could talk about some of the bigger amounts you might be able to win by matching certain symbols on the reels, let’s be honest: you want to know about the Mega Moolah jackpot. This jackpot is worth millions and is one of the most popular progressive slots online – and can be triggered on any single spin.

Here’s how the jackpot works. At the end of any spin, there is the possibility of triggering the random jackpot game. When this is triggered, you’ll be taken to the Mega Moolah Jackpot Wheel, where you’ll have the possibility of winning one of four different jackpots. Hitting the spin button will set the wheel in motion, at which point it could stop on any of 20 spots on the wheel.

Next up is the Major Jackpot, at which point we’re talking about large jackpots. Three spots are located to this prize, which usually awards $10,000 or more if you should hit it.

That leaves one spot on the wheel – the one reserved for the Mega Moolah Jackpot. If you happen to hit this space, try not to faint, because you’ve just become an instant millionaire. This prize has been hit several times over the last few years, with each player winning a life-changing amount of money. Prizes have been as large as €6.3 million, with other players winning $5 million or more (the currency you play in will depend on the casino you play in and where you play from). With winners usually coming about twice a year, the jackpot almost always grows well above $1 million before anyone manages to win the grand prize.

Theme and Presentation in Mega Moolah

While the theme isn’t the reason anyone plays Mega Moolah, it’s still nice to see that the developers of this slot put work into building a fun and enjoyable presentation into the game. Mega Moolah features a number of a colorful African animal symbols, and the entire game uses bright and friendly colors to draw you into the game. Even the little touches show an attention to detail that you might not expect from a game revolving around a huge jackpot. For instance, the bonus round could have simply featured a wheel that awarded prizes, but the game instead takes place on the African savannah. Even the wheel itself features four different sets of animal footprints that correspond to the four different jackpots you have the chance to win.