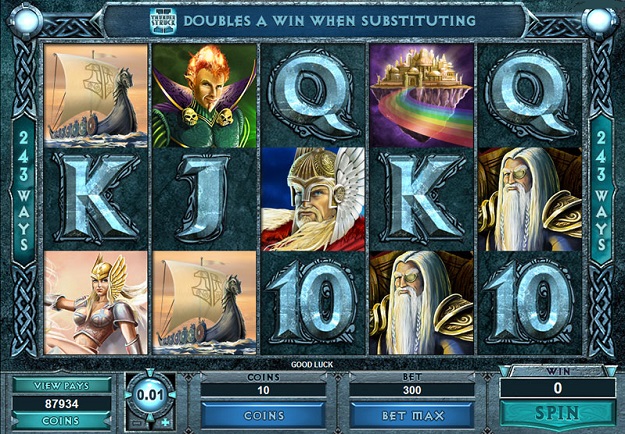 Whereas the original Thunderstruck game concentrated on the hammer-wielding Norse god Thor (and before he received his entry into the Marvel series of superhero movies), Thunderstruck II expands to include several more gods from Norse mythology.

Thor still makes an appearance of course, but he is joined on the reels by his half-brother Loki, the ‘chooser of the slain’ Valkyrie and the daddy to all these weather-obsessed gods, Odin. All these characters are joined in the ‘great hall of spins’ by some other viking-inspired symbols, plus the playing card values nine through to ace.

Payouts start at 5x your bet-per-line for three nines or tens, up to 1,000x your wager for five ‘Thunderstruck II’ logos.

Wild Symbol: The ‘Thunderstruck II’ logo acts as the wild symbol and substitutes for all other symbols aside from the scatter symbol. All wins containing a wild symbol are doubled.

Wildstorm Feature: The Wildstorm feature can strike at any time, and will randomly turn between one and five of the reels completely wild. Any wins you are due are then recalculated.

Valkyrie Feature: Awarded the first four times you enter the Great Hall of Spins. You receive ten free spins in which all wins are subject to a multiplier of 5x. Free spins can be re-triggered.

Loki Feature: First awarded when you enter the Great Hall of Spins for the fifth time. You receive fifteen free spins with the ‘Wild Magic’ symbol on reel three. This wild symbol randomly transforms symbols into additional wilds when it lands.

Odin Feature: First awarded when you enter the Great Hall of Spins for the tenth time. You receive twenty free spins with the ‘Wild Raven’ feature. Odin’s Ravens will randomly turn symbols into 2x and 3x multipliers.

Thor Feature: First awarded when you enter the Great Hall of Spins for the fifteenth time. You receive twenty-five free spins with the ‘Rolling Reels’ feature. Consecutive wins will increase the prize multiplier from 2x up to the maximum multiplier of 5x.

The Great Hall of Spins feature is a really great addition, as you are rewarded with higher bonus chances the more prolonged your playing session becomes, and there’s an amazing maximum jackpot of 2.4 million coins that can be won. All-in-all a truly great online slots game that deserves its wonderful reputation.