Lucky Leprechaun is a 5-reel, 20-pay line slot that was released by the gambling giant Microgaming just in time for St Patrick’s Day, 2015.

It’s another addition to the common ‘luck o’the Irish’ theme popular with both online slots makers and online slots players. A couple of suitable examples include Ash Gaming’s Leprechaun’s Luck (commonly found at UK online casinos owned by sports-betting companies) and Irish Eyes, which was also originally made by Microgaming. 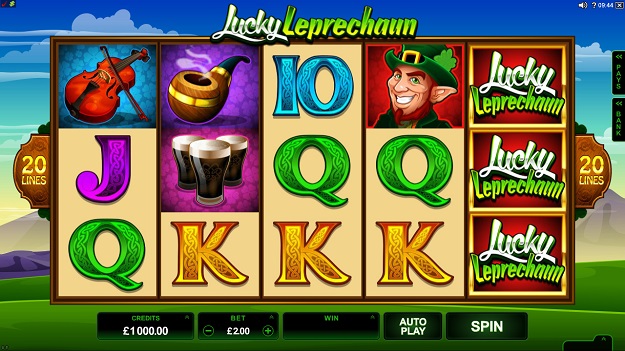 The symbols in this game are playing card values from ten to ace, as well as a few Irish-themed symbols, including a pipe, pints of Guinness, a fiddle, and the star of the show the Lucky Leprechaun himself.

To win one of the cash prizes, you simply need to land at least three identical symbols in sequence on one of the pay lines from the left hand reel onwards.
The lowest jackpot you can win is 5x your bet-per-line for three tens or jacks. The highest in normal play is 1,000x for five Lucky Leprechaun symbols.

Free Spins Scatter Symbol: This symbol is in the shape of a four-leaf clover, and if it appears on the right-hand reel it triggers five free spins in which all prizes are doubled.

During free spins, the Lucky Leprechaun symbol winks at you to become an extra wild symbol.

Trail O’Fortune Bonus Game: If you land at least three ‘pot of gold’ scatter symbols anywhere on the reels you’re through to the Trail O’Fortune bonus game. You receive one spin on the game for every scatter you land, plus one additional spin.

In this game, you’re required to spin a wheel containing numbers one to five. Whatever number the spinner lands on is the number of steps you take along the trail. The object of this bonus game is to make your way to the end of the trail where a 1,000x cash jackpot awaits.

There are two rainbow bridges along the trail you can cross to speed your progress, plus, if you uncover an emerald during your trip, you are awarded an extra spin.

Once you’ve used up all your spins, you are awarded a cash amount that’s more beneficial to your bank balance the further along the trail you managed to travel.

It has to be said that Lucky Leprechaun pays a substantial homage to the game ‘Leprechaun’s Luck’ made by Ash Gaming and owned by Playtech.

In addition, for a ‘modern’ release this is a pretty basic game, so it will appeal to players who prefer to play five-reel slots that don’t come loaded with so many bonus features that it’s difficult to get your head around them all.

The graphics are decent enough, and the bonus games keep things pleasantly entertaining. Players will no doubt undertake a few spins on Lucky Leprechaun hoping that a small amount of that famous ‘Luck o’the Irish’ will rub off on them!