The old Wild West is back again, thanks to Betsoft’s 3D slot The True Sheriff. The game is most suitable for the online slot junkies who like to play Wild West themed slots and love to see the rightful Sheriff win against the Villain. The sight of gunslingers, booze, cards, villains, loads of showgirls and saloons fits perfectly with the whole gambling idea and Betsoft has decided to put it all on the spinning reels.

The True Sheriff has 5 reels, 30 lines and features amazing 3D graphics. While playing this action-packed slot you will feel like you are in the actual Wild West surrounded by outlaws and gunslingers, with the Sheriff standing next to the reels to keep things in order. The game is cleverly designed and it comes with great bonus features. Even though it doesn’t offer a progressive jackpot, the True Sheriff comes with wild symbol, Showdown feature, Double Up feature, free spins and other features that are quite rewarding – with the maximum win being 750,000 coins. 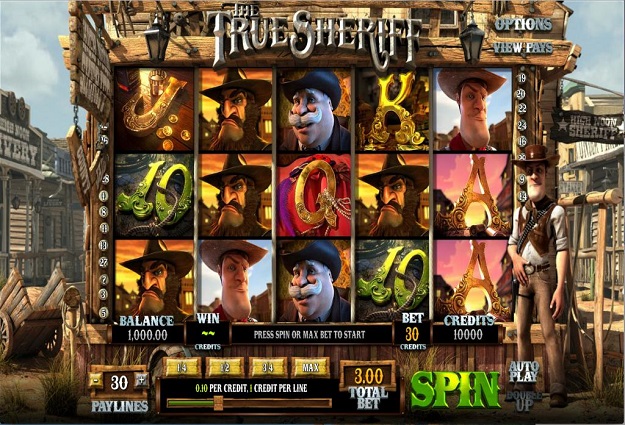 The entire action of the True Sheriff slot game is set in a Wild West town and the Sheriff is there to keep the streets clean. The biggest problem, however, are the bad guys that threaten to destroy the town and bring chaos.

All symbols are animated nicely. Some of the icons you will come across include the Sheriff, the Villain, showgirls, guns, the Mayor and Sheriff badge including the low value card symbols (10, J, Q, K and A). The Sheriff that stands to the reels is also animated and this becomes apparent when you hit a winning combination of symbols, with him performing various different moves.

The music of the slot also suits the entire setting. There’s a kind of classic Western soundtrack that accompanies you while playing. There are also sound effects for the free spins bonus round, the winning spins as well as for the Shootout feature. The betting limits of the game start from 0.60 and go up to 150.00 per spin, which will suit every players bankroll.

The wild symbol of the game is triggered by the gun symbol showing up on the third reel. The Wild Guns feature then activates and a cowboy shoots up the reels and turns 5 symbols into wilds. The reels then re-spin to generate potential wins. Three, four and five symbols pay out 30, 300 and 3,000 coins respectively.

The Showdown feature is activated when the Sheriff appears on reel one, the Villain appears on reel 5 and the gun symbol appears on an active pay- line on reels 2, 3 and 4. The Sheriff then appears and he shoots it out with the Villain. You get up to six win levels. A coin is toss and your task is to predict the outcome. If you guess it correctly you win a prize and advance to the next level. If you get it wrong twice, the round will end.

The free spins round is triggered by three or more Sheriff Badge icons. You will be rewarded with 10, 12 or 15 free spins and you will also get 30, 300 or 3,000 coin prizes respectively. Lastly, you can double up your wins in the base game by using the Double Up button.

The True Sheriff 3D slot by Betsoft is a pretty action-packed slot that comes with many exciting features. The game has original cinematic and great 3D graphics that are very realistic. The special features are quite rewarding, especially the re-triggering free spins and the cash prizes they come with. The True Sheriff is certainly a must-play slot!