There are few locations on Earth more mysterious than a mummy’s tomb. For centuries, explorers have tried to break into Egyptian pyramids and tombs to unlock what ancient riches might be stored inside. Now, Betsoft is giving you the chance to do the same from the comfort of your own home. In the Lost slot machine, players can explore ancient ruins, collecting prizes along the way. There’s even the chance you might run into a mummy…but hopefully not before you’ve taken home a prize worthy of a great adventurer! 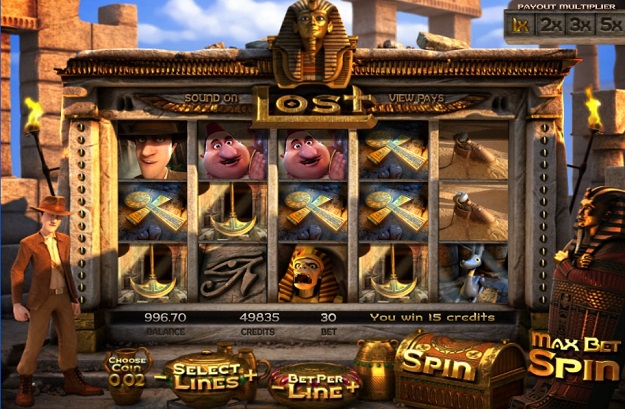 How To Play The Lost 3D Slot

Lost is a 30-line, five-reel slot machine that is a part of Betsoft’s 3D slots lineup. In this game, players are allowed to wager up to five coins per line; you’ll have a choice of several different coin denominations to choose from as well, with the exact choices depending on the currency you’re playing in.

In Lost, the object is to match as many symbols as possible on your active paylines. All winning matches must be made from left to right, with at least three of the same symbol needed to trigger a win. Of course, the more symbols you match, the bigger the prizes. Symbols that can instantly win for you range from the lowly scarab to the mummy and archeologist, which award large prizes. In total, there are seven symbols which award prizes directly to the player.

One thing you may notice early on while playing is that a couple familiar favorites — the scatter win and the wild symbol — are missing from Lost. However, this is made up for in the wide variety of special features found throughout the game.

The first special feature worth mentioning is the Monkey Click Me game. This game is triggered whenever you land a monkey symbol on the fourth reel. The monkey will activate a number of symbols on the reels, prompting you to choose one. Pick the symbol of your choice to reveal an instant prize of bonus credits.

Next, there’s the Center Wild Reel feature. If the staff symbol appears anywhere on the center reel, it will expand to fill the whole reel. This will then act as a wild symbol, mixing with any of the normal symbols to make winning combinations. Best of all, these combinations will now come with a 2x multiplier, further increasing the value of your wins.

There’s also a very cool second screen bonus known as the Mummy’s Tomb Bonus. This game is triggered if you happen to find four hieroglyphic icons anywhere on the reels. When the game begins, you’ll be presented with two doors to choose from, each of which will take you deeper into the mummy’s tomb. Choose wisely, and you’ll unlock another room full of treasures. However, pick the wrong path, and you might find yourself locked in a dead end, face to face with a reanimated mummy! At the end of this game, you’ll be awarded with bonus credits — the longer you last, the bigger the rewards.

Lost also features the Center Reel Respin function that has been so popular on recent Betsoft releases. This feature grants you a respin of the third (or center) reel each time you score a winning combination on the reels. If you win on any spin, you’ll see the payout multiplier move up a notch to 2x, and then the center reel will spin again. Hit another winning combination, and you’ll not only win a prize worth twice as much as usual, but the multiplier will climb to 3x, and you’ll respin the center reel yet again. This process continues until you finish a spin without winning, at which time the feature will end and you’ll have to spin the wheel again as normal.

While the biggest payouts are reserved for the bonus rounds or wins that use the payout multiplier, there are some pretty significant wins that can be won the traditional way without any bonuses, too. The biggest prize is the one attached to the archeologist himself. If you hit five of him on a single payline, he’ll reward you with 500 credits for each coin wagered. If you’ve bet the full five coins, that’s a 2,500 credit prize — and with the multiplier in effect, you can win up to 12,500 credits on a single line. Even without the presence of a progressive jackpot, that’s more than enough to feel like you’ve struck it rich.

Theme and Presentation in Lost

Lost uses a heavy Egyptian theme. During the game, you’ll be trudging through ancient Egyptian ruins, looking at mummies and searching for hidden artifacts. The main game screen may seem a bit light for the theme at first glance, but the foreboding shadows hint at what awaits you underground. The special features and games really fit the theme, especially the game in which you’re exploring the mummy’s tomb. The music has a hint of mystery and adventure, giving you a sense of what might be should you uncover a bonus round.