Black cats, spooky monsters and mysterious abandoned homes: they’re all part of the Halloween mystique. That’s what The Ghouls is all about, as this Betsoft slot machine features all of the classic symbols and icons you’d expect to see in a Halloween-themed slot machine. It’s more cute than truly scary, though: think Halloween the way you remember it from when you were young enough to go trick-or-treating yourself.

Despite the seasonal theme, though, The Ghouls is a game that can be enjoyed year round. With a bevy of special symbols and features, as well as a progressive jackpot that can be won whether you’re playing at the lowest or highest coin denomination, The Ghouls is a fun-filled fright fest no matter when you choose to play it. 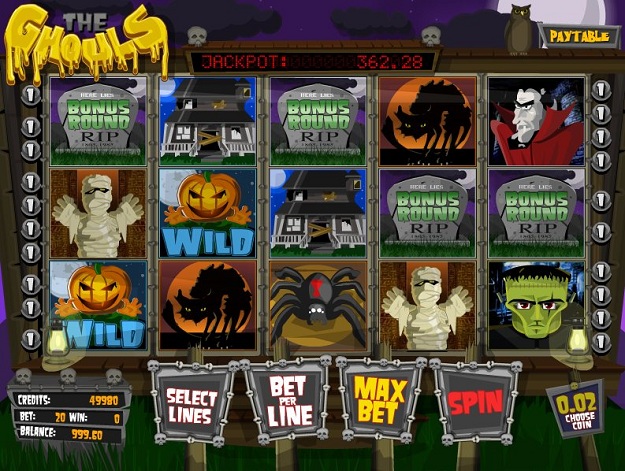 Visit www.DrakeCasino.eu to play The Ghouls!

The Ghouls is a 20-line, five reel slot machine that can be found in Betsoft online casinos (or any casino that features Betsoft slot games). Players can choose to wager anywhere between one and five coins per line, and a variety of different denominations are available. The game features cartoonish graphics and a lightly spooky soundtrack, creating the Halloween atmosphere without any real attempts to scare you.

The object of the game is to match symbols from left to right across your active paylines. There are eight symbols that you can match in order to win instantly, ranging from the lowly spider to the very lucrative haunted house. In all cases, you’ll need to match at least three of the same symbol in order to make a winning combination.

Prizes on the reels can vary radically depending on which (and how many) symbols you match. For instance, hit three spiders in a row, and you’ll win a small prize of 10 credits per coin wagered. But five haunted houses is worth 1,000 credits per coin – up to 5,000 credits in total, if you wagered the maximum of five coins per line.

The Ghouls also features a number of special symbols that fit into a few traditional slot machine roles. For instance, the pumpkin symbol acts as a wild substitute, helping to make winning combinations with any of the eight standard winning symbols on the reels.

Special Features on The Ghouls

Other symbols are used to trigger special features. First, there’s the vampire scatter symbol. Hit three or more of these symbols anywhere on the reels, and you’ll be rewarded with a number of free spins. The number of spins you receive will depend on the number of vampires you see on screen; this can range from receiving five free spins for three vampires, up to a maximum of 20 spins should you get all five vampires at once.

You’ll also want to keep an eye out for the grave symbols. These symbols are necessary for triggering the second screen bonus round. Hit three or more graves anywhere on your active paylines, and you’ll be instantly transported to a graveyard, where you’ll be presented with six graves to choose from. Choose a grave, and you’ll be give instant bonus credits! You can keep choosing graves until the game comes to an end, after which all of your winnings will be totaled. If you trigger this game with more than three grave symbols, your winnings will increase substantially.

In order to win the progressive jackpot, you’ll need to hit five mansion symbols on a single payline while making a maximum bet. Of course, the size of the progressive jackpot can vary greatly, depending on how long it has been since the jackpot was previously hit. However, it’s always substantial, normally ranging anywhere from 2,000 to 10,000 coins or more. Even on the same machine, each coin denomination will have its own jackpot; usually the higher denominations will also have larger progressive jackpots (though it’s always worth checking just to be sure there’s not an especially large jackpot building at a lower coin level).

Final Thoughts about The Ghouls

The Ghouls does not feature the high-end graphics or animations of many of the Betsoft 3D slot machines, and the very specific Halloween theme might not appear to most players throughout the course of the year (let alone players from countries where Halloween isn’t widely celebrated). That said, if you look past the theme, you’ll find a game that has all of the elements of a solid, fun slot machine. There aren’t a ton of different bonuses or special features, but the progressive jackpot alone is worth shooting for, and the normal prizes on the reels aren’t bad either. The Ghouls is definitely worth a look when you’re in the Halloween mood – and even if you’re not, you might want to check out just how big the jackpot is the next time you’re looking for a slot to play.

Visit www.DrakeCasino.eu to play The Ghouls!