Ancient Egypt is a fertile ground for slot machine themes. Between the pyramids, mummies, the Nile, and Cleopatra, there’s basically everything you need for an excuse to give away big prizes. One great example of a game that draws heavily on these ideas is Pharaoh King, an Egyptian-themed slot machine created by Betsoft Gaming. In this game, you’ll be given plenty of opportunities to win big prizes – especially if you can unlock the ancient tombs that house the Pharaoh himself! 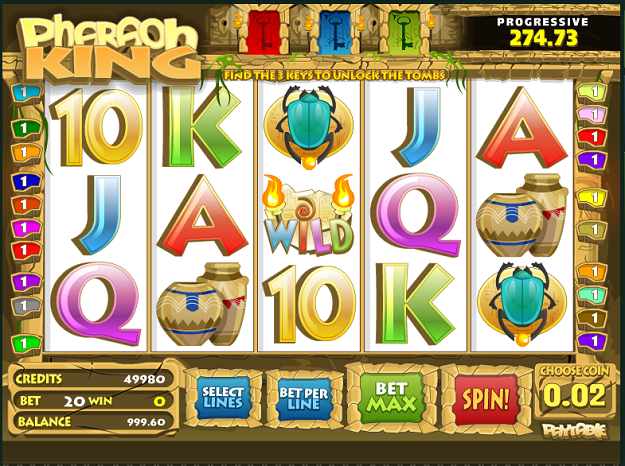 Pharaoh King is a 20-line, five reel slot machine which is available at all Betsoft casinos. Players can play for up to five coins per active payline, with a variety of different coin denominations available to choose from. The object of the game is to match identical symbols from left to right across any of your active paylines.

Players hoping to find a strong Egyptian influence on the standard symbols in Pharaoh King are likely to be disappointed. For the most part, you’ll be trying to match up the classic poker rank symbols, ranging from tens through aces. You’ll need to hit at least three of any of these symbols in order to win a prize.

For bigger wins, you’ll want to run into the clay jar or scarab symbols, each of which require only two symbols in order to trigger a win. The scarab is especially valuable, as matching five scarabs on a single payline will earn you a prize of 1,000 credits for each coin wagered – a maximum of 5,000 credits if you wagered a full five coins.

Of course, there are also some special symbols scattered around the reels that give you a few additional ways to win. The word scatter is particularly appropriate for the pyramids icon, which acts as this game’s scatter. If two or more of these symbols appear anywhere on the reels, you’ll instantly win a bonus prize – as much as 2,000 credits for each coin you’ve wagered if five pyramids show up on the screen.

Another icon to take a look for is the wild symbol. This symbol can substitute for any of the regular winning symbols (but not the scatter), with on exception, which we’ll talk about later. There is also a key symbol, which is critical for accessing this machine’s only bonus round.

In Pharaoh King, the biggest wins are reserved for players who can unlock the secrets of the pharaoh’s tomb. In order to do so, players must collect a series of three keys that can randomly appear on the fifth reel of this game. There are three distinct keys available: red, blue and green. You won’t have to run into all three on the same spin in order to win, though; instead, the game will remember which keys you’ve already collected, allowing you to know when you’re getting close to unlocking the bonus round.

When you do finally get the third key, you’ll be taken to a second screen bonus round that takes place in a tomb featuring six different urns. You’ll be prompted to click on the urn of your choice, which will reveal a prize of instant bonus credits. You can continue clicking on urns to reveal more prizes until you open one that includes the word “collect,” which signals the end of the game. At that point, your winnings will be totaled and added to your balance. This will also reset your keys, meaning you’ll need to find all three again in order to retrigger the bonus round.

There’s also a progressive jackpot available through Pharaoh King. In order to be eligible for this jackpot – which varies in size depending on the coin denomination you’ve chosen to play for. In order to win the jackpot, you’ll first need to be playing for the maximum number of coins allowed. You can then take down the progressive jackpot if you manage to hit five scarabs on a single payline. Keep in mind that wild symbols will not count towards this winning combination; if you have a wild symbol as part of a five scarab win, you’ll only be awarded the normal payout for that combination.

Pharaoh King isn’t exactly a flashy game, especially when compared to the rest of the games found in the Betsoft lineup. There’s only the one bonus game, and the graphics and sounds aren’t anything to write home about. But if you’re looking for a simpler slot that’s more about classic gameplay rather than presentation, you might find a lot to like about Pharaoh King. Not only does this game offer a big progressive jackpot, but there are also numerous ways to win big prizes on the reels: from the bonus round to the huge scatter wins, there are a ton of different prizes worth thousands of credits just waiting to be won. If winning big matters more than animations and interactive bonus features, Pharaoh King is definitely worth a look.