If there’s one word we’d use to describe Chase the Cheese, it would be “unique.” There aren’t many games out there like this one, which features an interesting 4×4 grid format on which to play. Sure, all of the elements of a slot machine are there; you’ll need to match symbols to win prizes, for instance, and you can play differing numbers of paylines or coins. But the unique game layout definitely leads to a few twists on standard gameplay, making Chase the Cheese a refreshing change of pace from the standard slot machine fare. 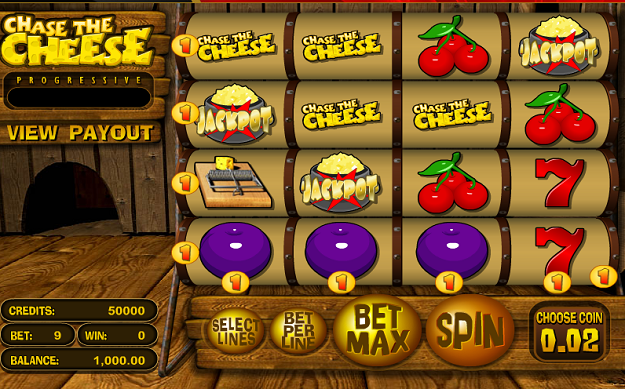 Basics of Chase the Cheese Slots

Chase the Cheese is a four-reel, nine-line slot machine that can be found in any of the Betsoft online casinos. This slot machine has a very unusual 4×4 layout, which falls somewhere in between the traditional 3-reel machines and the typical five-reel video slots seen at online casinos today.

Given that layout, it’s also worth mentioning how the lines work. The first four lines are, as you’d probably expect, the four rows of symbols running left-to-right across the reels. However, the next four paylines you can choose to play are the reels themselves, and run from top to bottom. Finally, the ninth line is one that runs diagonally from the top of the first reel to the bottom of the fourth reel.

The way in which prizes can be won is equally unique. As with most slot machine games, you’ll need to match like symbols on your active paylines. However, in Chase the Cheese, there’s no need to start those winning combinations from the beginning of the lines, or even from the end. If you make a winning match of consecutive symbols anywhere along a payline, you’ll be a winner.

This is important, as some of the eight winning symbols require only two of the same symbol in order to win prizes, so it’s possible to score a win right in the center of a line. This is especially true of smaller value symbols, some of which are based on traditional slot machine symbols like cherries and plums. Most of the higher-value symbols require three symbols to win, with four jackpot symbols required to win the largest prize.

We haven’t talked much about the theme yet, but as you might expect, it has a lot to do with mice and cheese. There are cheese symbols, mousetraps, the mice themselves, and the entire game appears to take place inside of a wall with a little mouse hole. The combination of more traditional symbols with these rodents is a little jarring, but for the most part, it works. There are no fancy graphics or animations, with most of the gameplay being more reminiscent of a basic slot machine then a complex video slot (albeit with the more complicated layout).

Chase the Cheese is hardly loaded with special symbols, but there is a wild symbol available. As in most games, this symbol will substitute for any other to help make winning combinations – which is quite common, given the game’s liberal rules for giving out prizes.

The main special feature in Chase the Cheese is the “Chase the Cheese Bonus Round,” which is triggered by (you guessed it!) the Chase the Cheese logo symbols that you’ll see all over this machine during gameplay. In fact, this is probably the most common symbol on the reels; however, it’s still difficult to trigger the bonus round, as you’ll have to fill an entire active payline with these symbols in order to access the special feature.

In this bonus game, you’ll take control of the mouse in a skill-based game that resembles a very simple video game. As the mouse, you’ll need to collect pieces of cheese scattered throughout each level, then move through the mouse hole before time expires. It is possible to die before finishing a level, in which case you won’t win anything and the bonus game will be over.

While the difficulty in this bonus game isn’t especially high, it is one of the more punishing skill-based games we’ve ever played in an online slot machine. While the rewards for doing well are quite high, it is possible to play hundreds of spins, finally reach the bonus game, and win absolutely nothing. Truly skill-based bonus rounds are rare, and ones that can actually leave you without a prize are even harder to find.

In addition, Chase the Cheese has a progressive jackpot available, with varying prizes depending on the denomination of coins you choose to play with. The progressive jackpot requires you to match four jackpot symbols in an active payline when playing for maximum coins.

Final Thoughts on Chase the Cheese

As we said at the beginning, Chase the Cheese is nothing if not unique. Between the unusual layout, the interesting method for awarding wins and the rare skill-based bonus round, Chase the Cheese provides a slots experience that’s different than any other we’ve ever seen. While we can’t say that Chase the Cheese is right for everyone, it’s worth taking a look at if you’re tired of playing the same old slots.