Have you ever heard the phrase “more fun than a barrel of monkeys?” We’re not exactly sure how much fun having monkeys in a barrel would really be, but one thing’s for sure: you’ll love them if they start making you money. In Monkey Money, you’ll be tasked with matching monkeys and other symbols in order to win some pretty hefty prizes. While it’s not the most impressive machine you’ll run into visually, Monkey Money features enough bonuses and surprises to keep the game fresh and fun no matter how long you keep playing. 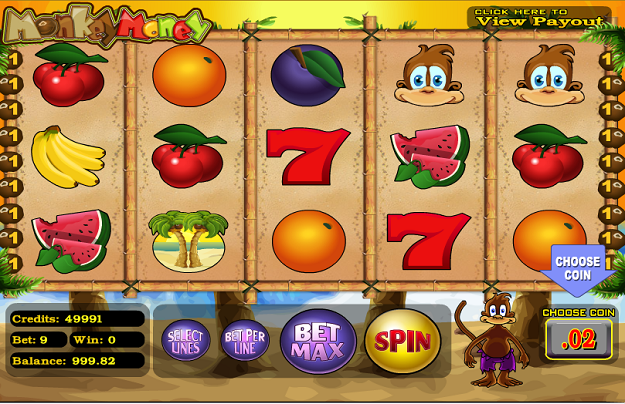 Monkey Money is a fairly standard five-reel slot machine that gives you the opportunity to win on up to nine different paylines at once. The object of the game is to match identical symbols from left to right across your active paylines, with most of the symbols requiring at least three of a kind to score a win.

There are a couple of exceptions at the low end; matching two cherries or plums is enough to win you a small prize. However, all of the higher-value symbols will ask you to match at least three in a row. Most of the symbols in this game are based on fruits, giving this game something of a “fruit machine” feel. Of course, since we’re dealing with monkeys in this game, the most valuable fruit of all is the banana.

The biggest prizes are attached to three major symbols. First, the coconut tree symbol can reward you with up to 2,000 credits for each coin you’ve wagered. Monkeys are even more valuable, offering a prize of 3,000 credits if you match five in a row. The most valuable symbol of all is the monkey coin. Match five coins in a row, and you’ll win 5,000 credits for each coin you wagered, up to a maximum of 25,000 credits on a single line. While the coin denominations available to you will depend on the currency you’re using, this can easily be worth over $10,000 if you’re playing for the maximum bet allowed.

If you’re looking for fancy graphics or animations, you won’t find them here. While Monkey Money is perfectly attractive thanks to some cartoonish graphics, and the silly music is fitting for a game about monkeys, it doesn’t stack up well compared to the 3D slots that are popular at Betsoft casinos. Still, the graphics are serviceable, and the bright colors and cheerful sounds make for a pleasant overall presentation.

Monkey Money features only a single bonus round. In order to access this special feature, you’ll need to collect three coconuts on the fifth reel. These coconuts can appear on the screen in any spin, after which you’ll see one fall into the hands of the monkey standing below the reels. The monkey will hold onto the coconuts between spins, meaning you don’t have to get all of your coconuts on a single spin.

Once you’ve accessed the bonus round, you’ll have the opportunity to help the monkey pick coconuts from a series of trees. Each coconut will award you with a prize of instant credits. The game continues until you run into a rotten coconut, which ends the game immediately. While the prizes from this game aren’t particularly large, this bonus game doesn’t take very long to trigger on average, which helps keep the gameplay fresh.

Monkey Money is a fairly simple slot machine. If you’re the type of player who needs a lot of bonus rounds, dozens of paylines or a progressive jackpot to make a slot machine worth playing, we can safely tell you to steer clear of this one. But if you prefer the classic style of game that simply has you matching symbols to win prizes, Monkey Money will get the job done. Sure, it may not be the most exciting game, but there are a lot of large prizes available on the reels, and we enjoyed the fact that the bonus round could be hit fairly frequently.

Overall, Monkey Money isn’t the type of game that will stand out from the crowd at a Betsoft casino, especially with the hype that their 3D slots receive. But if you’re already at one of those casinos and are looking for a more traditional slots experience, Monkey Money might be worth a look. While you’ll probably try lots of newer slots as they arrive in the casino, if you enjoy this machine, it’s likely one that you’ll go back to time and time again.