There’s no place in the world for gamblers like Las Vegas. Sure, Macau may have passed it by as the biggest gambling market in the world, but Vegas still has a charm and ambiance that can’t be matched anywhere else in the world.

Mr. Vegas captures this feeling by putting you into the shoes of a high-roller on the Vegas Strip. As Mr. Vegas himself, you’ll be playing in the biggest games, drinking the most expensive wines, and hanging out with the most beautiful women – all while winning a lot of money along the way. 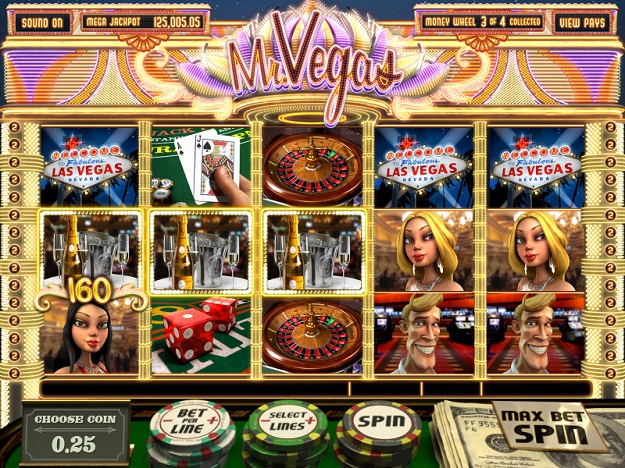 Mr. Vegas is a 30 line, five-reel slot machine by Betsoft Gaming. The game is a part of Betsoft’s 3D slots line, which means you can expect extensive graphics and animation, along with a host of fun bonus games. As with most Betsoft slots, you can play for up to $1 a coin and up to five coins per line, making the maximum bet per spin $150 in total.

While all of the Betsoft games do a great job of exploring their themes, Mr. Vegas is one of the best in this regard. When you first begin playing, you’ll be treated to an animated video sequence in which you’ll see Mr. Vegas receiving the VIP treatment at a swanky Vegas casino. To make the atmosphere all the more authentic, there’s even a cheesy song about Mr. Vegas being sung by a stereotypical lounge singer. It doesn’t get any more Vegas than that!

Of course, the object of the game is to match identical symbols across the reels. All of the symbols are classic Vegas standards, including cards, chips, and roulette wheels. For the big bucks, you’ll want to match one of Mr. Vegas’ two girlfriends (both offer the same prizes – Mr. Vegas doesn’t play favorites), or the showgirl symbol, which can earn you up to 500 credits per coin if you can match five of her across a single payline.

Where Mr. Vegas really stands out is in its bevy of special features. There are a number of different Vegas-themed mini-games that can earn you free spins, instant credits and much more.

The first of these is a Free Spins feature that is triggered whenever the Mr. Vegas symbol appears directly to the left or right of the dice symbol. When this occurs, Mr. Vegas will reach over and grab the dice, rolling them on a craps table. The number he rolls will become the number of free spins you earn! If he rolls doubles, that’s even better; you’ll receive double your normal winnings during the free spins as a result.

Next up is the Mini-Slots game. If you hit three or more slot machine icons on a single payline, you’ll trigger this bonus feature. It’s a slot machine within a slot machine, but this one is a little less complex than a Betsoft 3D game. Actually, it’s a fairly good representation of classic three-reel slots: you’ll need to match cherries, bars and sevens in order to win prizes. You’ll have three chances to win a prize on the mini-slot, with each win earning you bonus credits. During testing of this slot, we hit this feature several times; sometimes, we won nothing on it, and other times we managed to win on up to two of the three free spins, sometimes earning in excess of 1,000 credits during the mini-game.

One very fun slot bonus round is the Money Wheel Jackpot. Many of the symbols on the reels contain a special “money wheel slab” icon in the upper-right corner. If you manage to land five of these little slabs anywhere on the reels on a single spin, you’ll get to take a spin on the money wheel. This game can earn you a variety of different rewards, ranging from free spins and instant credit winnings to transitions into other bonus rounds and even a shot at the game’s progressive jackpot. The jackpot isn’t enormous, but it’s still a great bonus; while we were playing the machine, the progressive jackpot was just over 7,500 credits.

Finally, if you can land Mr. Vegas symbols on reels one, three and five on a single spin, you’ll get treated to the Roulette Bonus Round. You’ll end up at the roulette table with Mr. Vegas and his lovely ladies. Pick three numbers, and if one of them is hit, you’ll win a huge reward – often over 2,000 credits.

Mr. Vegas truly captures the look and feel of a Las Vegas casino – but more importantly, it’s a whole lot of fun to play. The numerous bonus rounds make the gameplay varied and interesting, while the theme itself is a perfect choice for a slot machine. If you’ve always wanted to travel to Vegas, but don’t want to take a week off from work and pay for a plane ticket and a hotel, Mr. Vegas is a great alternative that you can play right from the comfort of your own home.