When you think of exterminators, you probably picture men who battle ants, termites, and other little menaces. But in Betsoft’s The Exterminator slot machine, the title character deals with bigger trouble – everything from squirrels to bears. In the game itself, you’ll watch him do battle with a wily raccoon that’s always lurking around the next corner. Find the raccoon, and you’ll get paid handsomely for your efforts in the game’s exciting bonus round. 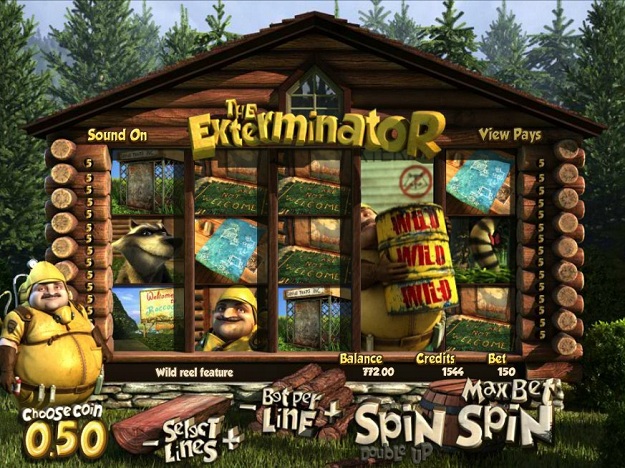 General Info on The Exterminator

The Exterminator is one of the newest Betsoft Gaming 3D slots. It features five reels and up to 30 paylines, and gives players the option of playing up to five coins per line. Several different denominations of coins are available for players to choose from, so there are options no matter how much money you’d like to spend on each spin.

The object of the game in The Exterminator is to match identical symbols from left-to-right across your active paylines. There are eight different “standard” winning symbols for players to match, ranging from doormats and traps to garbage cans, the raccoon, and the exterminator himself. In all cases, you’ll need at least three-in-a-row to score a win, and the more symbols you match, the bigger your prizes will be.

There are also several different bonuses scattered throughout the game, each of which has a different way of awarding you some extra cash. First, there’s the wild symbol – this time represented by the exterminator’s truck. Whenever this symbol appears, it will expand to cover the entire reel, after which it can take part in any winning combination. The expansion won’t occur until after the sticky win feature is finished (more on that below), giving you an even better chance of scoring multiple wins.

Next up is the Free Spins game. In order to trigger this bonus round, you’ll need to hit at least five footprints symbols scattered anywhere on the reels. That will trigger the “Great Raccoon Chase,” a free spins game that comes with random multipliers on every spin. That means that on any given spin, your winnings can be worth as much as 5x their normal value.

The most exciting special feature is likely the second screen bonus round that’s triggered whenever you hit five or more blueprint symbols anywhere on the reels. In this game, you’ll take a look at the side of the cabin with the exterminator. You’ll have a choice between several areas where the raccoon might be hiding. Choose one and see the results – after you’ve finished, you’ll immediately receive a large reward in bonus credits!

Finally, it’s also worth mentioning that The Exterminator has a gamble feature that can be played after any normal winning spin (not including bonus rounds). In this feature, you’ll have a chance to guess whether the next card out of a standard deck will be red or black. Guess correctly, and you’ll double your winnings, but if you’re wrong, you’ll lose whatever you’ve won.

The Exterminator Theme and Presentation

The Exterminator features colorful and fun graphics along with a lighthearted soundtrack. The reels are set in a cabin-like home located out in the woods, and there are plenty of natural sounds throughout the game to support that setting. During gameplay, you’ll constantly see the raccoon jumping around in an effort to get the best of the exterminator, including playing some pranks on the unsuspecting man. The choices made in the game’s icons are good, too; of course they fit with the theme, but the color scheme also blends in naturally with the game’s display, creating a very engaging look and feel.

Top Payouts on The Exterminator

In most online 3D slots, you’ll want to match the game’s important characters in order to win big prizes. The Exterminator is no exception, as the raccoon and exterminator are the two highest-paying symbols on the board. The exterminator is the symbol you’ll really want to shoot for, as hitting five of him in a row on any of your active paylines will award you with 500 credits per coin wagered – up to 2,500 credits if you’ve wagered the full five coins.

Favorite Features in The Exterminator

Our favorite feature in The Exterminator is the Sticky Win feature. This special bonus is activated every time you make a winning combination of symbols – and in a rare departure from most games, this even includes combinations that trigger the game’s bonus rounds.

Each time you score a win on the reels, the game will lock those winning symbols into play. Rather than pay you immediately, the remaining symbols will respin. If more symbols now participate in winning combinations, they’ll lock into place too, and the respin will take place again with the remaining symbols. This process will repeat itself until one of two things happens: either you fail to make any new winning combinations, or all fifteen slots on the reels are now part of wins, so there’s nothing left to respin. At that point, you’ll be credited with all of your winnings, including any bonuses you may have been offered.