Play At The Copa

At The Copa Game Information

Betsoft Gaming continue to release innovative slot machines focused on unusual themes. At The Copa is a dance-themed online slot based around Salsa – the popular style which originated in Cuba in the mid 1970’s. It is yet another stunning 3D slot which features a total of three 3D characters – with the main character being dancer Carolina who is situated on the left of the reels and performs various dances to celebrate players wins. The game is accompanied by high-tempo dance music and with a maximum win of 430,000 credits on offer it is sure to set your pulse racing! 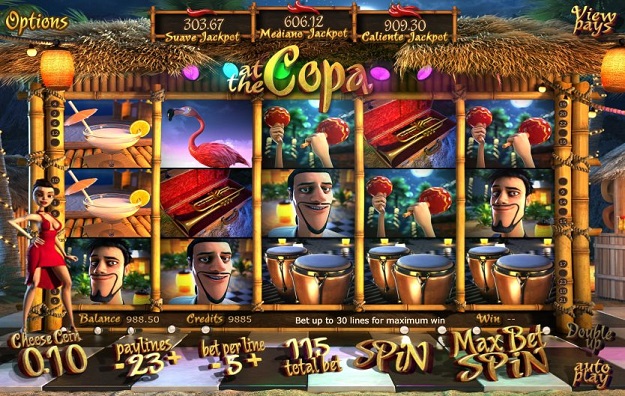 Visit www.DrakeCasino.eu to play At The Copa now!

At The Copa Gameplay and Symbols

The symbols used in At The Copa accompany the slot perfectly. The three highest paying symbols are the characters of the game with five Carolina symbols on a payline paying out 500 coins, while Rico and Pedro symbols pay out the same – with five of either of them on a payline paying 300 coins. Along with these there is a pink Flamingo, Bongo drums, Maracas, a Trumpet, and Cocktails. There is also a dancing shoes symbol (trigger the free spins mode), an Ocean symbol (the games Wild), and Chilli Pepper symbol (required for the progressive jackpot).

At The Copa Bonus Features

Double Up: Like many 3D slot machine games from Betsoft Gaming, At The Copa contains a double-up feature. After any base game win players can select the ‘double up’ button which sees them taken to the bar where male dancer Pedro is awaiting. He then asks players to choose heads or tails, with heads on the coin being Carolina’s face, and tails being a set of Maracas. Should players choose correctly their win amount is doubled and Pedro celebrates, but if the incorrect choice is made the winnings are lost and Pedro drinks a shot in disappointment

Wild Symbol and Reel: Most of you will know what a Wild symbol does. It substitutes for all other symbols during play to give the highest win on a payline possible. What is great about At The Copa is the fact if you land the Wild in the center reel it will turn the whole into one Wild which gives the opportunity for massive wins. There is also a multiplier for consecutive center reel Wild wins which goes up to 5x, with the center reel Wild disappearing after the 5x multiplier spin, or before if there is no win.

Free Spins Mode: The free spins feature can be activated by landing three or more dancing shoe symbols anywhere on the reels. Players are given a total of ten free spins and when taken to a new screen are asked to choose a dance partner of their choice – either Carolina, Rico or Pedro. Whichever dancer the player chooses will become the Wild throughout the free spins feature – plus every spin has a random multiplier attached to it ranging from 2x to 10x which always proves valuable.

Progressive Jackpots: The At The Copa slot machine features a total of three progressive jackpots – all of which are worth a varying amount. In order for players to have a chance of winning one of the jackpots it is important to note that the max bet must be used, otherwise it will not trigger any of the jackpots. Each of the jackpots require five chilli pepper symbols to land on the reels, however how they land will determine which of the three jackpots will be won, as follows:

Suave Jackpot – This is the smallest jackpot and requires the five chili peppers to land on any reel.

Mediano Jackpot – This is the middle jackpot and requires five chili peppers to land in any position on lines 2 and 3.

Caliente Jackpot – This is the games largest jackpot and requires all five chili peppers to land on the first payline.

Dance Bonus Round: No dancing-themed online slot would be complete without a Dance Bonus Round, and this one is not only very enjoyable, but also very rewarding. It is an instant win game which is triggered by landing the male dancers on either side of Carolina on the reels (Pedro, Carolina, Rico, or Rico, Carolina, Pedro). Players are then taken to a second screen where they must choose Pedro or Rico to compete in a dance competition. The animated dance plays out and players are rewarded with a random instant win.

Visit www.DrakeCasino.eu to play At The Copa now!