One of the classic horror stories is that of a young couple finding themselves stranded in some backwoods town, forced to look for help at a mysterious mansion that’s just as creepy on the inside as it appears on the outside. That’s the storyline that exists in the world of House of Fun, where you’ll get the chance to explore a Gothic home filled with freaks, ghosts and even a few genuine scares – along with a whole lot of money for those lucky enough to survive their stay! 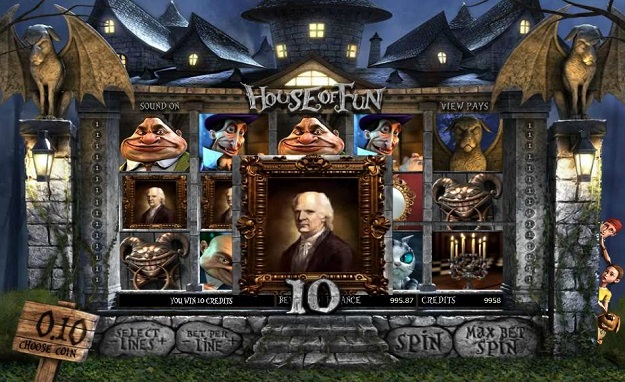 Basic Gameplay in House of Fun

House of Fun is a 3D slot from Betsoft Gaming that features 30 paylines and five reels of action. Players can play up to five coins on each line, with the coin denominations available ranging from $0.02 to $1.

The game really plays the horror theme for all it’s worth. There’s an entire cast of creepy characters that populate the mansion, and they all appear as symbols on the reels that can earn you big prizes. Each time you win, you’ll get an animation that shows these guys in action. Our heroes – the couple (named Paul and Jane) and their trusty dog – stand on the right side of the screen, and react in fright after each winning spin.

There are plenty of winning combinations available on the reels, though the wins in the standard portion of the game are relatively modest. You can win small prizes by matching three or more paintings, mirrors, candelabras or gargoyles. The bigger prizes are mostly reserved for some of the house’s human (or human-like) inhabitants, who can earn you up to 150 credits per coin wagered if you match five of them on a single active payline. That means the maximum you can win on a single payline is $750 – certainly nothing to sneeze at, even if it’s not a huge payout.

House of Fun contains three additional special features that can earn you some extra cash or additional ways to win during play. The first is a simple free spins bonus, and is triggered whenever you hit three or more jack-in-the-box symbols anywhere on the reels. Not only will this earn you five or more free spins, but the center reel will be completely wild for the entire bonus round, greatly increasing your chances of winning multiple prizes on each spin.

Another game that can be activated right on the reels themselves is the Mad Click Me game. If you hit three or more of the Mad Hatter (this isn’t Alice in Wonderland, but that’s the best way to refer to this character in a tall purple hat) on one of the three main paylines – the three that run straight across the reels – you’ll trigger one of the classic Betsoft “click me” bonus rounds. In this game, three different symbols on the reels will be selected, and you’ll have the option of choosing any of those three. When you pick one, you’ll reveal a number of credits that will instantly be awarded to you. You’ll also get the chance to pick again, revealing more and more prizes until you finally reveal a prize along with the word “COLLECT,” which signals the end of the game. Keep the game going for long enough, and this can result in prizes worth as much as thousands of credits!

Finally, there’s the Escape Bonus Round, a second screen game that’s trigger if you hit three or more door knocker symbols on any active payline. When the game begins, you’ll find the stranded travelers trapped in a room with five doors to choose from. Your job is to help them escape from the house once and for all by choosing doors and hoping you find an exit. Look out, though – many of the doors have surprises behind them! When you finally find the door that allows Paul and Jane to escape, you’ll be rewarded with a number of bonus credits that can range from a few hundred to a few thousand.

Final Thoughts on House of Fun

House of Fun is an interesting name for this slot machine, as it’s hard to imagine Paul and Jane having much fun during their visit. On the other hand, it can certainly be a lot of fun for real money slot machine fans, as this game features plenty of different ways to win and enough variety to prevent play from becoming too boring.

The relatively modest payouts available from House of Fun are likely to divide players into two camps. While the game doesn’t seem to have a particularly high house edge, it generally doesn’t pay out with big jackpots. Instead, you’ll win moderate amounts of money more frequently. If you’re a jackpot hunter, that means you probably have better options out there for you. On the other hand, if you like a less volatile slot machine, House of Fun will probably give you what exactly you’re looking for.