Once upon a time, there was a slot machine that took place in a magical world of fairies, wizards, trolls and elves. In fact, this game featured just about every fairy tale trope one could imagine! It all took place in a lovely wooded grove, and everyone lived happily ever after…with a huge pot of gold, of course.

Enchanted takes the world of fairy tales and turns them into a breeding ground for slot machine fun. And while all of the cute graphics and entertaining mini-games are certainly enjoyable, the incredible prizes are likely to be what enchants you into playing this game again and again. 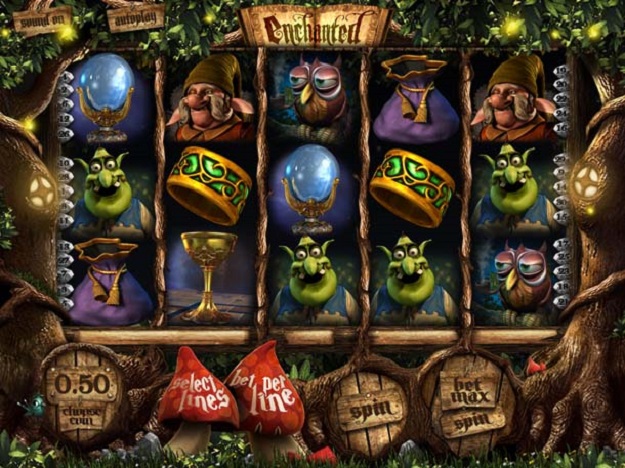 Enchanted is a 3D slot game developed by Betsoft Gaming, and if you’ve read any of our other reviews on games from this series, chances are that you won’t be surprised by the basic gameplay features. As usual, this is a five-reel slot, and players can choose to play on anywhere from one to 30 active paylines, each of which may be played for up to five coins. Coin denominations are also the Betsoft standard, ranging from $0.02 to $1.

The fairy tale theme is anything but subtle, with colorful imagery and cheerful sounds and animations permeating throughout the game. The game begins with an animated sequence that introduces you to all of the game’s main characters, and the action of the slot machine takes place inside a forest scene that includes images like storybooks, houses built into trees, and giant mushrooms. Even the fonts used throughout the game look perfect for the children’s fantasy theme.

Of course, the main object of Enchanted is to match symbols from left to right across your active paylines. For most symbols, like rings, crystal balls and owls, you’ll need to match at least three of a kind in order to win a prize. For instance, three goblets will earn you 20 credits per coin wagered, while a full five will win you 300.

The biggest prizes are reserved for the game’s fantastic characters – and when we say these prizes are big, we mean it. In many of Betsoft’s games, a prize like the one we mentioned for the goblet might be the largest (or among the largest) offered during standard gameplay. In Enchanted, it’s not even close to one of the major prizes. Tonk the Elf, Rufus the Ogre, Seera the Angel and Elrid the Wizard all award small prizes even for matching just two of their symbol. Match five, and you’re in for some huge rewards, ranging from 1,000 credits for Tonk up to a massive 5,000 credits for Elrid. That means that if you match five of the wizard while wagering the full five coins at $1 a piece, you can win $25,000 on a single payline! This is among the largest prizes offered on any Betsoft slot machine.

Enchanted also offers a number of different special features that can be triggered on the reels each of which give you additional ways to win prizes. First is the Tonk’s Tinkering Doors game, which is triggered if you should collect three Golden Keys on the 5th reel during play. This feature is interesting, as you do not have to get all three keys on the same spin; the game will keep track of your keys, and award the bonus after you receive the third key. In the game itself, you’ll see a number of locks appear on the reels (which are apparently in need of repair), and you’ll get to choose three to open up, revealing prizes. While it takes a while to trigger this game, it’s extremely lucrative; when we finally got the chance to try it, we won 2,175 credits.

Next up is the Crazy Hat’s Crazy Reels game, which is triggered whenever you hit two or more crazy hat symbols. This feature starts by making the crazy hats into wild symbols, which will, of course, trigger extra winnings. However, the game gives you additional chance to win by triggering three “respins” on different reels, changing the combinations and giving you additional opportunities to win.

Should you match three or more spellbook symbols on an active payline, you’ll trigger the Ultimate Spellbook Free Spins game. Instantly, you’ll be given a number of free spins that can earn you additional rewards. In addition, a special Enchanted symbol will be added to the third reel; should this symbol stop in the center position of that reel, you’ll gain additional free spins.

Finally, the second screen bonus round in Enchanted is triggered if you should hit Seera and Rufus next to each other on any active payline. In this game, you’ll try to help Seera recover her bird, which has been stolen by Rufus the Ogre. If you manage to recover the bird, you can earn hundreds of bonus credits!

We could talk more about Enchanted’s magical theme and friendly, inviting graphics, and those certainly are noteworthy. However, what will attract most slots players to this game are the huge jackpot prizes you can hit if you manage to connect with one of the highest value combinations of symbols. Prizes this large are rare in Betsoft games, so this is definitely a welcome change of pace. Players who enjoy the style and feel of the Betsoft 3D slot machines but have been hoping for bigger prizes should give Enchanted a try – you might just find the happily ever after you’ve been looking for.