Bank heists might be some of the most exciting criminal enterprises around. Look, we’re not saying you should go out and rob a bank in real life, but it sure makes for a great story when someone else does it. Movies like Oceans 11 have shown just how cool a group of highly-motivated thieves trying to break into an unbreakable vault can be. And hey, as long as nobody gets hurt, the thieves can even be the heroes!

In Heist, you’ll follow the exploits of high-end bank robber Neil Quaylan, as well as the officer charged with hunting him down – Detective Albert Kowalski. As you work your way into the vault, you’ll have a chance to take down a huge score…as long as you don’t get caught in the act! 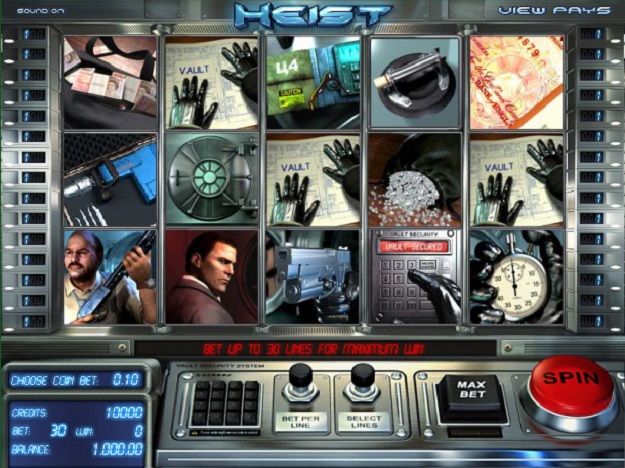 Heist is a 3D slot machine by Betsoft Gaming. It features most of the same gameplay elements that have become standard throughout the range of 3D slots from Betsoft: 30 paylines, five reels, and the ability to spend up to five coins (each worth as much as $1) on each line.

The game takes place inside the latest bank vault that Neil is targeting: a massive bank holding millions of pounds that are ripe for the taking. As in most slots, your goal is to match as many identical symbols as possible across each active payline. The more matches you make, the more money you win!

Of course, some symbols are worth more money than others. Items like stopwatches, vault layouts and the security system are generally low-value symbols. On the other hand, our main characters can earn you quite the score. Find Quaylan himself on all five reels of an active payline, and you’ll earn up as much as $2,500 on a single spin!

Heist is all about the bank robbery theme. Every symbol in the game is directly tied into the attack on the bank, with items like money, bags, and guns making appearances. Even the aesthetic elements of the game are tailored towards the theme; everything in the game, from the graphics to the fonts, have that cool, sterilized modern look that you’d expect to find from a high-tech, high-security bank vault.

Special features are a big part of Heist and it’s one of the most popular online slots with bonus rounds, as there are no less than four different bonus rounds that you can trigger by hitting the right types of symbols at the right times.

Let’s start by talking about the Glass Cutter game, which is activated any time you hit three or more glass cutter symbols on any of your active paylines. When this occurs, you’ll be prompted to select your choice of the three glass cutters, each of which holds a prize behind it. You could win a variety of different rewards, including instant bonus credits, free spins, or access to one of Heist’s other bonus rounds.

Another fairly simple bonus is the Wild Reel. In a nice bit of flavor, this game is triggered only if you land the C4 explosives symbol in the center position of the center reel. When this happens, an explosion will occur, and the center reel will become wild. In addition, all wins including the wild reel will feature a 2x multiplier, making your wins even more lucrative. Even better, the wild reel sometimes becomes locked, allowing you to earn an additional spin with the center reel remaining entirely wild and awarding double the normal winnings!

Unlike most of the Betsoft games, Heist also features another casino classic: a scatter symbol. In this game, the scatter symbol is a drill. Hit three or more drills anywhere on the reels, and you’ll instantly win a prize that’s based on the size of your wager for that spin.

Finally, there’s the biggest special feature of them all: your chance to break into the bank vault and remove as many valuables as you can! If you hit three vault symbols on any active payline, you’ll instantly be transported to a second screen, where you’ll get the play the roll of Neil himself. You’ll be able to choose from different methods of entry and escape, working your way through the vault while trying to stay one step ahead of Kowalski. Once the sequence plays out in front of you, you’ll be rewarded with bonus credits for your efforts.

Of all of the Betsoft 3D slot games, Heist does one of the best jobs of really getting into its theme. Amazingly, the characters of Neil and Kowalski actually feel like they fit into the game, rather than just being included in the game as an afterthought. Everything just feels like you’re part of a massive bank heist, which makes the game a whole lot of fun to play. This is especially true in the bonus games, all of which really dig into the bank heist theme.

If you’ve ever watched a bank robbery movie and thought “I’d like to do that, if it weren’t for it being highly illegal and likely landing me in jail for decades,” give Heist a try. It may not quite have the danger of a real life bank vault heist, but it’ll definitely give you the chance to walk away with a whole lot of cash.