If you enjoy a good science fiction story, you’re probably familiar with the idea of weird alien beings flying advanced spaceships to Earth – either to invade the planet, teach us how to be better people, or just to stop by and say hello. Many of these stories involve heroic humans who fight back against the alien menace.

Arrival is a Betsoft slot machine that takes all these popular sci-fi tropes and turns them into a fun and entertaining 3D slot machine. During the course of the game, you’ll play the part of a futuristic space marine who battles aliens and has to save his compatriots from the many extraterrestrial forces that are out to invade Earth! 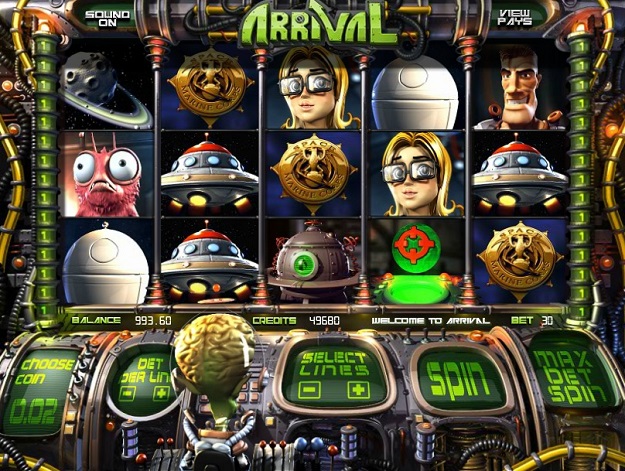 Arrival is a five-reel, 30-line slot machine that’s available in most Betsoft casinos. The game is designed for play for up to five coins per line, with a coin value of anywhere between two cents and a dollar. This means that the machine can, at a maximum, be played for up to $150 per spin.

During the course of play, you’ll be attempting to match symbols while sitting at the console of an alien spaceship – complete with a little green man who will taunt you throughout play. The object, as always, is to match multiples of the same symbols across the active paylines in order to win prizes. Lower value symbols, such as a space marine badge or a small planet require you to match at least three symbols consecutively to win a prize. On the other hand, the higher value symbols can make you a winner as long as you hit two or more symbols from left to right.

The big money comes by hitting the space marine symbol. He’s the main character in this game, so it’s not surprising that he has the biggest rewards; match five of him on the same payline, and you’ll earn 400 credits per coin wagered. If you’ve wagered the maximum number of coins at $1 each, that’s a $2,000 payout!

The gameplay is definitely heightened by the thematic elements in the 3D slot machine. The music for the game truly evokes the epic score of an alien invasion movie, while the on-screen alien pilot’s taunting (and celebrations, when you win) actually made me chuckle a couple of times. Even spinning the reels really feels like part of the theme; you’ll see the alien hit a few buttons on his console, and you’ll hear the engines of the ship fire up as the reels begin to fall into place. When you win, you’ll be treated to some cute animations, as well as a variety of reactions from your alien companion.

The real fun on the Arrival slot machine, of course, comes with the special features. These slot bonus games are always a strength of the Betsoft slot machines, and Arrival is no exception. There are three different bonus games, each of which gives you a new way to win big prizes.

The first is the “UFO Click Me” game, which is triggered whenever you hit three or more ray gun symbols anywhere on the screen. When this occurs, you’ll be prompted to select UFOs from several that appear; each one will reveal instant prizes of various numbers of credits.

A particularly lucrative game is the Abduction Wild Reel feature, which starts if you manage to find three alien pilot symbols anywhere on the reels. Once this occurs, you’ll be awarded a number of free spins. To make these bonus spins even more valuable, one of the reels on screen will become wild throughout the entire bonus game, increasing your likelihood of winning dramatically.

Finally, the biggest and most engaging game is the Rescue Bonus Round. In this game, you’ll be presented with one of the classic situations in a pulp science fiction story: the brave marine must rescue his female coworker who has been abducted by the evil alien! As you work your way through the rescue, you’ll be rewarded with a large bonus.

Arrival is a great slot machine, at least for the right type of player. The gameplay itself is fairly typical for a good slot machine; there are a number of bonus features, but no scatter or wild symbols, and the payouts on the reels are relatively modest. If theme doesn’t matter to you at all, then Arrival is likely to be a decent slot machine, but nothing more.

On the other hand, if you can get into the theme, you’ll have a great time playing Arrival. Alien adventures make for classic science fiction stories, and the combination of animations, sounds, music and gameplay elements really evoke the feel of a 1950’s era space adventure. If you love those kinds of stories and want to have fun playing a slot that explores that theme, Arrival is the perfect game for you.