While many of the games we review are very similar in design, we can safely say that you’ve never played a game quite like I.R.I.S. 3000. This unique slot machine has only a single payline, and the only way to win is by matching five symbols on that one line. But while that might make it sound as though this is a pretty basic machine, there’s nothing simple about I.R.I.S. 3000. If you play this machine, you’ll quickly discover that the quirky, unusual gameplay is actually rather fun and engaging – once you figure out exactly what’s going on. 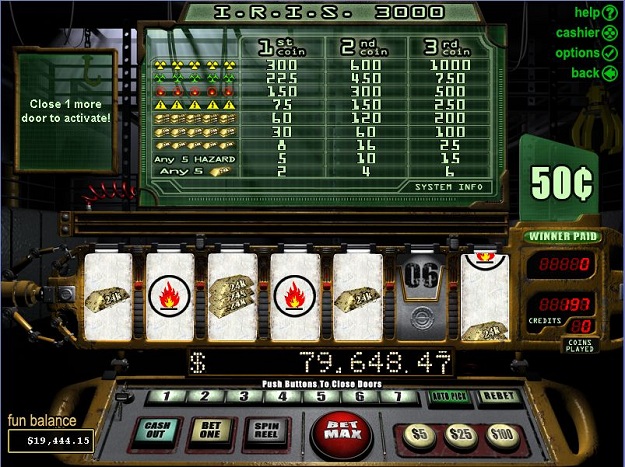 I.R.I.S. 3000 is a single line slot machine which is available at all Realtime Gaming casinos and is always played at the $0.50 denomination. Players may choose to wager between one and three coins on each spin; however, as you’ll find out later, wagering the full three coins is definitely the way to go when playing this machine.

When you first load up this machine, you’ll see seven closed doors. In order to start the game, you’ll have to pick five doors (or allow the game to choose them at random) to open. You’ll then need to place credits into the machine before playing.

Once you choose to spin the reels, you’ll see that the five doors you’ve chosen to open act like reels. Essentially, in basic gameplay, you’ll need to score a winning combination on these five reels in order to win a prize. In order to score a win, you’ll have to match five of the same symbol, or five of the same symbol type. There are three different gold bar symbols (a single bar, double bar, and triple bar), as well as four different types of hazard symbols that can be matched.

Essentially, this is all that you need to know in order to play I.R.I.S. 3000. However, there are some twists in the gameplay that make this game a lot more complex than it first seems.

The special features on I.R.I.S. 3000 kick in when you play for more than a single coin. There are two small lines above the seven “doors” on the machine. A red dot will begin moving back and forth on one of these lines during each spin if you wager two coins; if you wager the full three coins, you’ll see two red dots instead.

Each of these red dots will stop above one of the doors at random. If a light should land above one of the two remaining closed doors, you’ll hear a warning siren, after which that door will open, giving you an addition reel with which to make a winning combination. Keep in mind that while you need five-of-a-kind to score a win, the five symbols do not have to be consecutive across the reels in order to count, as in most games.

The real fireworks begin if the two red dots stop above your two closed doors. At this point, both doors will open, giving you the best possible chance to score a win. In addition, a multiplier will be added to your winnings, rewarding you with anywhere from 2x to 10x the normal winning amount. Hit the 10x multiplier while matching five radiation hazard symbols and you’ll win the game’s progressive jackpot.

It’s hard to classify exactly what I.R.I.S 3000 – which stands for Interactive Real Intelligence Slot, by the way – is all about. The machine looks like some sort of cross between imagined steampunk technology and an aging Cold War era machine that’s rusting in a forgotten warehouse somewhere. Regardless, the overall effect is quite bizarre. The warning sounds and the look and feel of the machine are quite jarring compared to most other slots at Real Time Gaming casinos such as the Texan Tycoon slots game.

But this isn’t a bad thing. Playing the same old machines again and again can get boring, so a game like I.R.I.S. 3000 is definitely a welcome change from the ordinary. Even without amazingly complex graphics or much in the way of musical effects, I.R.I.S. 3000 definitely evokes a feeling that you won’t quickly forget.

The top payouts in I.R.I.S. 3000 are all associated with the radiation symbol. Assuming you’ve bet the full three coins, hitting five radiation symbols will earn you 1,000 credits (if you bet just a single coin, only 300 credits are won).

More importantly, this is also the combination you’ll need in order to have a chance to take home the slots progressive jackpot. Should you hit these five symbols while also triggering a 10x multiplier on the same spin, you’ll win the jackpot, which often rises to above $150,000. Keep in mind that you must play all three coins in order to have a chance to trigger the bonus multiplier and the progressive jackpot.