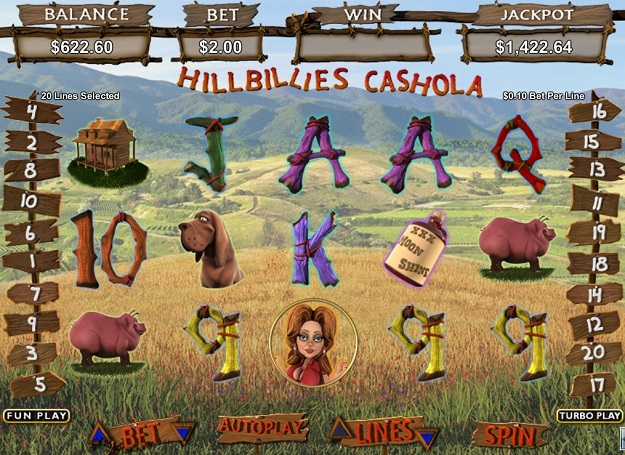 Presented in cool 3D, this game has some pretty awesome icons. It features a dog, moonshine bottle, a very fat pig, a shack (or cottage), and tied together wooden whittled numbers (9, 10, J, Q, K, A).

The bonus and wild icons are what you want though. Normally in your day to day life you probably wouldn’t want to associate with Hillbillies, but in this game you want them to crash your reels.

Three hillbillies, two males and a female, act as wilds and multipliers. The old man (reel 1) and the woman (reel 3) are two times multipliers and the middle aged drunk man (reel 5) is a five times multiplier. Whenever you hit one of these wilds, the respective hillbilly will give a YEE-HAW, clap their hands and do a little dance, or take a big swig of their rot gut moonshine. This is pretty cool and adds to the excitement of hitting a win.

The sounds in the game are pretty good too, with little hillbilly jingles gracing your ears whenever you get a win. These unique jingles continue when you’re spinning for another hillbilly to hit to get the bonus free spins and during the free spins themselves. As I mentioned, the sounds when you hit a hillbilly multiplier are genuinely country and fun.

Every so often a prairie dog pops up along the bottom of the screen to have a look around. I have no idea why, or what it does, but he’s cute and fluffy. I love how cute they look, so I’m all for the prairie dog and its wandering ways in the game.

The minimum wager starts at a penny, so it doesn’t matter how big (or small) your bankroll is, you can take a shot at this great slot machine.

Wild Multipliers: The multipliers that the hillbillies give you really increase your chances of a big win. You could get up to a 20x multiplier on any spin which would be a substantial win, especially if you’re max betting. The cherry on the top is that after you get awarded these big multipliers you also get the free spins. The free spin bet amount is awarded at whatever level you were betting when you won the free spins.

Progressive Jackpot: Like many RTG slot machines, Hillbillies Cashola offers a progressive jackpot. It’s randomly awarded at the conclusion of any spin, so the only thing you can do to activate it is play. You must make the maximum bet to be eligible to win the progressive jackpot.

Many people would consider hillbillies to be simple people. The Hillbillies Cashola slot machine is designed in a simple manner just like the people the game is named after, but it’s done very well.

RTG has produced a game with excellent graphics and spot on sounds and jingles. The icons are simple and clean, and getting a bonus is straightforward. The 3D components add to the slot machine and a progressive jackpot is always a nice sweetener.

This is another fun slot machine by Real time Gaming and I’m sure that Hillbillies Cashola will keep you entertained for hours.