Ghost Ship from the software provider Realtime Gaming is a different pirate themed slot game. It does not feature the cannoned deck, squawky parrot and the other hustle bustle usually associated with this theme. This pirate ship is abandoned and floating without a crew like a specter on the oceans. The ghost of the captain returns now and then to the ship he once commanded. You will find the usual Realtime Gaming features in this Real Series video slot. 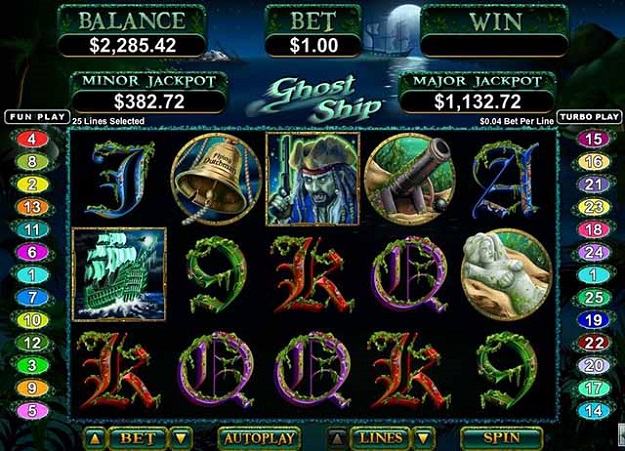 The reels are set in the background of the sea with the ghost like ship silhouetted against the full moon. It creates an appropriately eerie atmosphere. The main symbols are the ghost captain and the ghost ship. In the win animations, the captain fires his pistol and the ship tosses on a rough sea. The high paying symbols are the ship’s bell, treasure chest, cannon and prow figurehead – all of them sunk to the ocean floor. These symbols start paying when two symbols appear aligned from left to right on an active payline. The playing card icons from A to 9 are shown draped in seaweed.

Ghost Ship is a 25 paylines slot game. You have the option of selecting less than 25 paylines. However, it cannot be overstated that the correct online slots strategy is to play with all lines enabled. The line bet can be varied from 0.01 to 0.25. This gives a total bet range from 0.25 to 6.25. The slot game will not interest high rollers very much. The line payouts indicate that there in not much volatility. The top three payouts are 2500, 1250 and 1000 coins.

This slot game is ideal to put on Auto Play, while you sit back and watch or even complete some other work. The Auto Play can be set to 1000 spins and will stop on its own if the selected conditions are met. The maximum win per spin is 50,000 times the line bet.

Wild Symbol: The ghost captain is fearsome looking but it is a symbol you will want to see as often as possible. It is the wild symbol and it substitutes for all symbols except the scatter symbol. It also awards the highest line payout. When the ghost captain or the ghost ship land on any reel in the base game, the captain may fill up the remaining spots on the reel.

Scatter Symbol: The ghost ship is the scatter symbol. It awards scatter payouts when three or more appear anywhere on the reels. These payouts are multiplied by the total bet. The top scatter payout for five ghost ship symbols is 100 coins. Three or more scattered ghost ships also trigger the free spins feature. You will be awarded 2 free spins for each ghost captain and ghost ship symbol that appears anywhere on the reels in the triggering spin.

Ghost Ship is a fast paced slot game without too much fuss. It has a simple game play and pays out reasonably well. Despite there being a progressive jackpot you will not win life changing amounts on this slot game, but at the same time will not lose too much thanks to the variance levels.