The Aztec’s were one of the great civilizations of Central America. Today, genuine Aztec artifacts are priceless, which explains why they’re so heavily prized. While you might not be able to get your hands on any ancient Aztec riches in the real world, the Aztec’s Treasure slot machine gives you the opportunity to win a small fortune in the world of online casinos. With a random jackpot and plenty of other ways to win large prizes, playing Aztec’s Treasure could earn you enough money to purchase your own small piece of the Aztec empire. 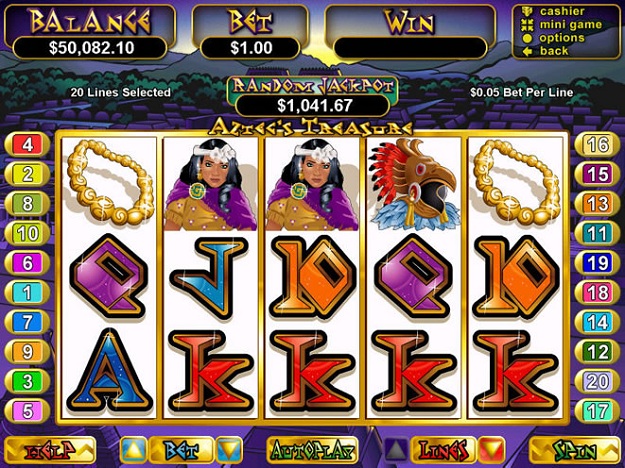 Aztec’s Treasure is a 20-line, five-reel slot machine that can be found at most RTG casinos. This game is given a volatility rating of Very High, meaning that this is a game in which huge wins and long losing streaks are both potentially possible. Players are permitted to wager anywhere between $0.01 and $5.00 on each line, allowing players to bet up to $100 total on each spin.

In Aztec’s Treasure, players can win by matching themed symbols from left to right across active paylines. As with most of the Real Series slot machines, the lower-value symbols are represented by poker rank symbols, ranking from the lowly nine to the mighty ace. For bigger prizes, you’ll want to match symbols that are based on world of the Aztecs: jewelry, masks, leopards and an Aztec woman. Most symbols require three of a kind to win a prize, but some of the highest-value symbols can win small prizes even when you only hit two symbols in a row. In fact, the Aztec woman will give you a couple credits even if only one appears on the first reel!

Another symbol you’ll see on the reels is the Aztec King. This symbol acts as a wild substitute, and can take the place of any of the normal symbols as part of a winning combination. In addition, you’ll want to watch out for the Idol symbol. This scatter will trigger a win anytime you hit at least three of them anywhere on the screen. Scatter wins are multiplied by the total amount you bet during a given spin; for instance, hitting five Idols will earn you 100x your total wager.

Aztec Treasure isn’t really a game that’s big on special features. The only bonus game that can be reached occurs whenever you hit three or more Idols during the same spin. When this occurs, you’ll trigger a number of free spins. Hit just three Idols and you’ll get five spins; match a total of five Idols, and you’ll gain a maximum of 25 free spins.

These free spins come with all kinds of bonuses that greatly increase the winnings you receive in this special feature. For instance, each time you hit a scatter symbol in these spins, you’ll win a bonus prize equal to the size of the bet you made on the spin that triggered the bonus round. In addition, every scatter symbol will award additional free spins, allowing you even more chances to win. Best of all, every winning combination (with the exception of the Idols) you make during the free spins will pay out at triple the normal rate.

As we mentioned earlier, this is a high volatility slot machine, which means there are some very big prizes that can be accessed on the reels. The largest of these comes when you hit five Aztec women on a single payline. This offers 5,000 credits, or up to $25,000 if you played for the maximum of $5 per line. In the bonus round, where winnings are tripled, that means that you can win as much as $75,000 on a single line! Other very large prizes include hitting five leopards (2,500 coins) or five masks (1,000 coins).

In addition, there is also a random progressive jackpot that can be hit at the end of any spin, regardless of whether or not you won a prize during that game. This random jackpot isn’t especially large – it usually hovers between $1,000 and $2,000 – but it’s still a nice surprise, especially if you’re playing for low stakes when you hit it.

The Aztec’s Treasure slot is a Real Series slot machine, meaning that it shares a lot in common with the other games in this line. The graphics are minimalistic, and the game’s only sound effects are designed to emulate the sounds of a slot machine, rather than add anything to the Aztec theme. The icons are stylishly designed, but aren’t exactly breathtaking. Overall, you’ll find that while the theme and presentation aren’t reasons to play Aztec’s Treasure, they don’t take away from the gameplay, either.