Even if you don’t know much of the mythology of Achilles, you’re likely familiar with something about this legendary Greek hero. Achilles was said to be one of the greatest warriors who took part in the Trojan War, one of the most famous stories handed down to us from Ancient Greece. Even if you’re not one for reading mythology, you’ve probably heard of Achilles’ heel (or Achilles’ tendon), the idea of a singular weakness that takes its name from the one part of Achilles’ body that wasn’t invulnerable to attack.

In the Real Time Gaming slot machine Achilles, you’ll take part in some of the same legendary journeys and battles as this mythic hero did, scaling the walls of Troy while earning some nice cash prizes along the way. With numerous references to mythology and a sizable random jackpot, Achilles is enjoyable to play whether you’re familiar with Greek mythology or just enjoy a good gamble. 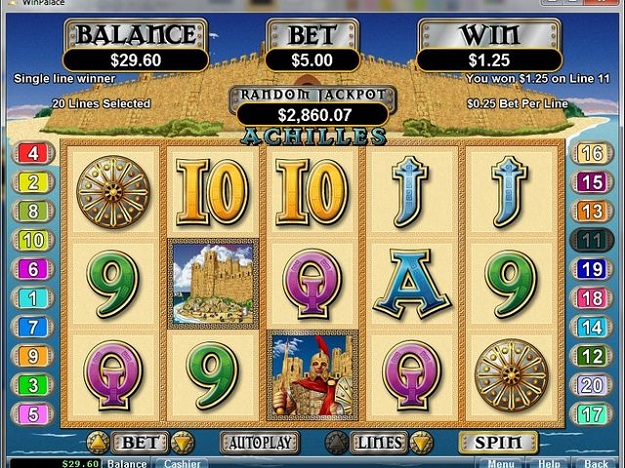 Achilles is a 20-line, five reel slot that can be found at most RTG online casinos. Real Time Gaming classifies this game as a Medium volatility slot, meaning that there’s a fair mix between big prizes and consistent payouts. Players have the ability to wager up to $5 per line, allowing for up to $100 in bets on each spin.

In Achilles, the goal is to match identical symbols across your active paylines. In order to win, matches have to be made on consecutive reels moving left to right across the screen. In total, there are ten basic symbols that award prizes when you make matches. The most common of these are the card rank symbols, running from nines up through aces. For any of these symbols, you’ll need to match three in order to claim a prize.

Larger prizes can be won by matching symbols that represent some iconic symbols of Ancient Greece and the Trojan War. Banners and shields are valuable, while the famous Trojan Horse and Helen herself grant even larger prizes. For any of these symbols, even matching just two in a row will earn you at least a small prize.

In addition to these standard symbols, there are also a couple of special icons that have different effects on gameplay. The first of these is the warrior Achilles, who acts as a wild symbol. Achilles can be used to form winning combinations with any of the symbols we mentioned above, or can trigger large wins all by himself.

There is also a scatter symbol in this game, which is represented by the city of Troy. If you match three or more Troy symbols anywhere on the screen, you’ll win a prize equal to a multiple of your total bet. This can range for 3x your wager if you hit three Troy symbols, up to 500x your bet for hitting a full five Troy icons.

There are two special features found in Achilles, each of which revolve around rewarding you with free spins on the reels.

The first of these games is activated whenever you hit three or more Achilles symbols anywhere on the screen during a spin. When this occurs, you’ll be prompted to select one of the Achilles symbols; doing so will reveal a prize of between 15 and 25 free spins. During these free spins, all of the scatter symbols will be changed to Achilles and Helen symbols instead, making it much more likely that you’ll trigger some huge wins. Furthermore, all of these spins will be played with a 3x multiplier, allowing you to triple your winnings.

A similar feature can be triggered by hitting three or more Troy symbols anywhere on the reels. When this occurs, you’ll be granted 10 free spins, each of which will feature a 2x multiplier. You’ll also have a good chance of retriggering this bonus; during your free spins, any mixture of three Achilles and/or Troy symbols on the screen will earn you ten more free spins.

The largest prize you can win while playing Achilles occurs (not surprisingly) when you hit five Achilles symbols all on the same payline. This triggers a win of 10,000 credits, or as much as $50,000 if you’re playing for the maximum amount per line.

Theme and Presentation of Achilles

The graphics and sound in Achilles are fairly basic, similar to those found in most of the RTG Real Series games. That said, the game does do enough to make sure the Greek theme stands out, even if the efforts to do so are a little underwhelming. Images of Troy can be found throughout the game, including in the background behind the reels, and both Achilles and Helen show up often enough to remind you that you’re not just playing a generic slot. It’s not as exciting as 3D slot machines, but it’s a simple slot that works.