The Sherlock Mystery slot machine has been developed by Playtech and is based on the legendary character Sherlock Holmes, a fictional detective created by the Scottish author Sir Arthur Conan Doyle back in the late 1800’s. The books have proved so popular through generations that several television shows and films have been created based on the character, and now Sherlock Holmes is the feature of an exciting slot which contains a free spins mode and Crime Scene bonus game. 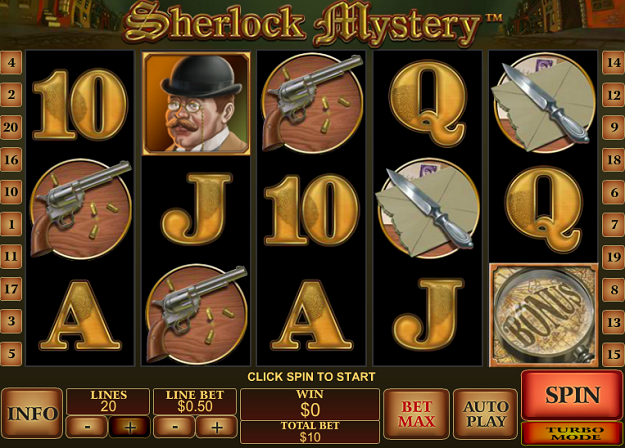 The Sherlock Mystery slot machine contains 5 reels and 20 paylines. It is fully adjustable so you can play as little as one line or up to the full twenty, with the amount you can stake on each line ranging from a mere $0.01 up to a maximum of $100, meaning you can bet from as little as $0.20 per spin up to a maximum of $2,000 for the high rollers amongst you. There is an autoplay feature which you can set to a specific number of spins and it will stop if you trigger a bonus feature, but most interesting is the turbo mode which sees the reels spin almost instantly – perfect if you are in a rush and just want to try your luck with a few quick spins.

The symbols used in Sherlock Mystery are pretty basic but they do include several characters from the Sherlock Holmes novels. The standard playing card symbols of 10, J, Q, K, A are used on the reels along with more relevant symbols such as a 221b Baker Street address plate (Sherlock Holmes’ address which acts as the games Scatter), gun with bullets, letter with opener, magnifying glass with the word bonus (used to activate the bonus game), Dr Watson, Professor James Moriarty (Wild symbol), and of course Sherlock Holmes.

Interestingly it is not the Sherlock Holmes symbol which is the highest value. Instead Professor James Moriarty, which is the games Wild symbol, is the highest value and should you be lucky enough to land five of him on the reels you will be rewarded with a massive payout of 10,000 coins. Being Wild, it also substitutes for other standard symbols to further increase your wins though it doesn’t substitute for the Scatter or Bonus symbols, and it also doesn’t act Wild to trigger the Sherlock meets Watson feature which you will learn more about below.

Sherlock meets Watson: If you manage to land the Dr Watson symbol to the immediate right of the Sherlock Holmes symbol anywhere on the reels you will be rewarded with an instant win which is worth 3x your stake – and this is something which occurs very regularly in Sherlock Mystery.

Free Games: The Sherlock Mystery free spins feature is activated by landing three or more of the 221b Baker Street symbols anywhere on the reels. You will then be awarded ten free spins with the gun symbol acting as an extra Wild for the duration of them and if it is part of a winning combination you will get a random multiplier bonus worth 2x, 3x, or 5x. What is most exciting about this feature is the fact you can continue to trigger the free spins mode over and over again, and the Sherlock meets Watson and Crime Scene Bonus features can also be activated while playing your free spins – offering lots of opportunities to land big wins.

Crime Scene Bonus: This is the main feature in the Sherlock Mystery slot machine and is activated when you land the Bonus symbol (magnifying glass) on reel 1, 3 and 5 all on the same spin. You are then taken to a different screen where you will find yourself in a bedroom which is the crime scene. Here you must select from eight different objects which are: a curtain, painting, lamp, drawer, broken wine glass, slippers, suitcase, and the bed duvet. Once you click on the objects they will reveal a random win amount and you can continue selecting items until you pick the one with the word ‘collect’ which will end the bonus feature and award you your total win.