Net Entertainment are famous for developing interesting and unique slot machines, but The Invisible Man is certainly one of their most intriguing slots to be released in quite some time – plus it offers players the opportunity to win up to 200,000 coins!

The original story was created by English author H.G. Wells in 1897 and later in 1933 Universal Pictures produced a film version of the story. It is based around Doctor Griffin who is a scientist and sets out on a mission to enable people to become invisible, only to sucessfully complete the procedure on himself, but find himself unable to reverse it. 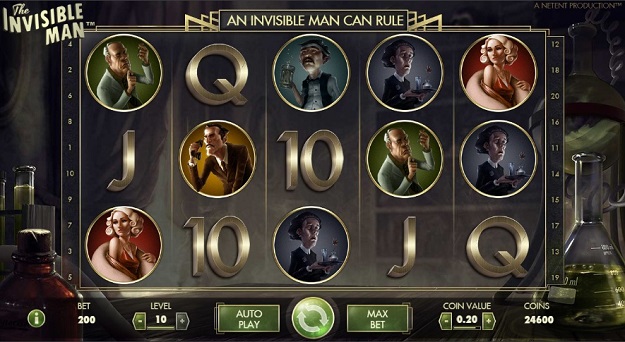 The Invisible Man Gameplay and Symbols

The Invisible Man slot machine has been developed by Net Entertainment, and like the majority of their slots it contains a total of five reels and twenty paylines. The game is set in the scientist’s laboratory and rather dramatic background music is played throughout gameplay which really adds to the drama. The coin options in The Invisible Man are 0.01, 0.02, 0.05, 0.10, 0.20, and 0.50 with players having the option of betting between 1 and 10 coins per line. This means players can play all paylines for a minimum of €0.20 up to a maximum of €100.

Anyone who has watched the movie will be familiar with the characters who feature as symbols on The Invisible Man slot. The characters which NetEnt have included are: Doctor Jack Griffin/Invisible Man, Constable Jaffers, Flora Cranley, Doctor Arthur Kemp, Doctor Cranley, Mr George Hall, and his wife Mrs Janny Hall. These character symbols are acompanied by standard Ace to 10 playing card symbols. The Griffin and Constable Jaffers symbols are Wild (more on those below), with Flora Cranley being the highest valued standard charater symbol with five of her on a payline being worth 500 coins, in comparison to the Q, J and 10 symbols with five of each on a payline being worth just 60 coins.

Police Wild: The Policeman symbol (Constable Jaffers) acts as a Wild, substituting for other symbols to give you the highest win possible. Polce Wilds appear only on reel one, but move from left to right each re-spin which proves very rewarding, plus the feature occurs during the base game as well as the Free Spins and Police Spins bonus features.

Griffin Wild: The Griffin symbol (The Invisible Man) is also a Wild, and acts similarly to the Police Wild. Rather than starting on reel one, Griffin Wilds begin on reel five and consequently move from right to left each re-spin.

Free Spins: To activate the free spins feature in The Invisible Man slot machine players must have the Police and Griffin Wild symbols move into the same position, where they then merge together. This rewards players with 10 free spins, however there is opportunity for 4 more each time the Police and Griffin Wilds merge. Throughout free spins gameplay the Police and Wild symbols can land anywhere, unlike the base game where they only land on reel one and five respectively. It is important to watch out for the two meters which display above the reels in this feature – one is for Griffin wilds and one is for Police wilds, with each of the meters having a total of eight spaces to fill. To fill a space one of the corresponding symbols must move off the reels, for example a Griffin Wild moving off the reels will fill one space on the Griffin meter. When one of these meters is filled before the end of the free spins mode it will activate an additional bonus game.

What we really enjoyed aout the Free Spins feature was the video introduction which sees The Invisible Man hide behind a wall to avoid being spotted by Constable Jaffers, then the free spins play out, and at the end a newspaper displays on the screen stating how many coins have been won along with a headline stating that Scientist Doctor Griffin has gone missing.

Police Spins: The Police Spins feature triggers when the Police meter is filled and sees players rewarded with three free spins, which doesn’t sound much, but when you consider that five burning wilds also appear on the reels randomly, it brings some huge wins!

Griffin’s Rage Bonus Game: This feature triggers when the Griffin meter is filled and sees you join the hunt for The Invisible Man. The feature takes place in three locations and players must select five items which can contains anything from cash prizes, multipliers, or the dreaded end feature.