Tomb Raider is one of the most successful action-adventure video game series of all time, notable both for featuring a female protagonist and for its unique style of gameplay that influenced countless games that would come after it. Tomb Raider has also been a popular theme for slot machines, including Tomb Raider: Secret of the Sword. This game not only features the famous Lara Croft throughout the game, but also allows players to go on some fantastic adventures of their own – and just like Lara, players might find some incredible treasures hidden deep within this game. 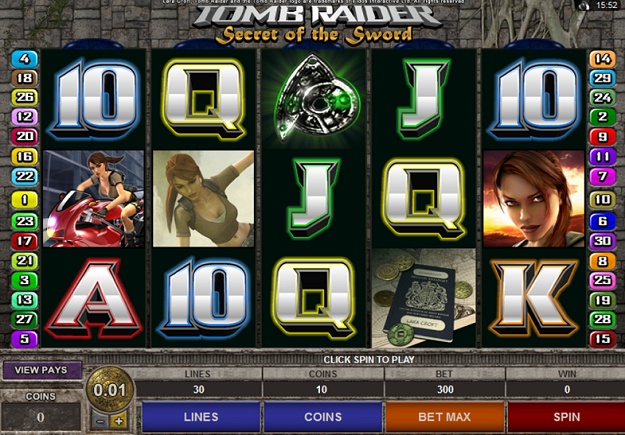 Visit www.Guts.com to play Tomb Raider Secret of the Sword!

Basic Gameplay in Tomb Raider: Secret of the Sword

Tomb Raider: Secret of the Sword is a five-reel, 30-payline slot machine available at Microgaming casinos. In this game, players have the option of betting anywhere between $0.01 and $0.20 per coin; with up to 10 coins per line, that means players can wager as much as $60 on each spin if they so choose.

While this is a game that’s filled with various special features and bonus rounds, the basics of this machine are just like any other slot you’ve ever played. The object is to match identical symbols across your active paylines; the more symbols you match, the more money you’ll have the opportunity to win. While the basic card rank symbols of tens through aces take up the lower-value symbol slots, you’ll find bigger wins if you can match action shots of Lara Croft.

In particular, the close up shot of Lara’s face is particularly valuable. Not only can it create large wins on its own, but it also acts as a wild symbol, allowing you to complete any normal winning combination. In addition, there is also a relic symbol that acts as a scatter. If you hit two or more of these symbols anywhere on the reels, you’ll win a prize equal to a multiple of the total amount you wagered on that spin — up to 100 times the wager amount if you can hit five relics at the same time.

Special Features in Tomb Raider: Secret of the Sword

The special features are where Secret of the Sword really shines above most of its competition. There are three different bonus rounds — two of which offer free spins, and one that’s an incredibly entertaining adventure game.

First, there’s the randomly triggered Super Mode, which can award you with five free spins at any time. In this game, you’ll randomly see wild symbols added to the reels after some of the spins; these wild spots will remain locked for the rest of super mode, allowing you to win with greatest frequency.

Another way to earn some free spins is through the Rolling Reels feature. End any spin with three or more of the relic scatter symbols on the screen, and you’ll win a variable number of free spins. These games also come with a Rolling Reels bonus; every time you make a winning combination, you’ll see the winning symbols explode off the reels, allowing new symbols to fall into place. Each time this occurs, you’ll be given a larger multiplier on any future wins that might occur as new symbols take their place; keep winning, and this multiplier can grow to as much as 5x.

However, the most exciting bonus round has to be the Global Adventure Bonus. Each time a passport symbol falls into the center position of any reel, that reel will become activated. Activate all five reels, and the global adventure bonus begins. In this game, you’ll travel around the world to five destinations, each of which holds a piece of the secret sword. In each location, you’ll play a “pick me” game in which you might uncover an instant prize, an additional mini-game, a piece of the sword, or a trap. Two traps will end your adventure, but otherwise, you’ll be able to travel to all five locations, collecting rewards. Finish collecting all parts of the sword, and you’ll win an additional bonus. In the end, the prizes in the Global Adventure Bonus game can be massive, sometimes being worth tens of thousands of credits!

Of course, Tomb Raider: Secret of the Sword is just the latest in a long line of games based on the popular Tomb Raider franchise. As always, you’ll follow along with adventurer Lara Croft, who circles the globe looking for rare treasures and hidden relics. This comes across extremely well in this game, especially in the incredible bonus round that features several different “adventures” for you to go on.

One often overlooked area of slots presentation is voice acting, but this game makes sure to go the extra mile by having Lara and her mentor interacting in conversations throughout the game. This adds that little extra bit of immersion to this game, and for some players, we suspect that will make all the difference. While the graphics and sound in this game are merely good and not incredible, the overall effect of the presentation is among the best we’ve seen in any slot machine, and we applaud the creators for doing their best to create an authentic Tomb Raider experience.

Biggest Payouts in Tomb Raider: Secret of the Sword

The biggest payouts in this game definitely come in the Global Adventure Bonus, where you can win up to 450x the average of the total spin wagers made on the spins that activated the passport symbols. But there are also some big wins available on the reels themselves, especially if you should manage to connect with five wild Lara symbols on a single payline. When that occurs, you’ll win a prize of 7,500 credits for each coin wagered.

Visit www.Guts.com to play Tomb Raider Secret of the Sword!