Game of Thrones has been one of the most anticipated online slot machines to be released by Microgaming in quite some time. As any Game of Thrones fan will already know, it is a licensed slot machine based on the hugely successful fantasy-drama HBO series. The television series has been captivating audiences since the first series aired back in 2011 and it has only become more popular as the series have progressed, hence why Microgaming have produced this stunning slot machine. It features the original logo, ‘Houses’, background music and sound effects from the series – as well as one of the most exciting and rewarding free spins modes we have ever come across! 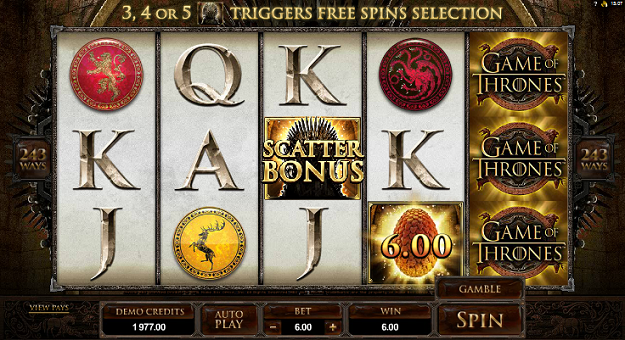 Game of Thrones Gameplay and Symbols

Game of Thrones is a 5-reel slot machine and when you first load the slot you are greeted with a message asking if you’d like to play in 15-payline or 243-ways format. These are the only options available – paylines cannot be adjusted. Between 1 and 10 coins can be bet on each line and the betting options available are 0.01, 0.02, 0.05, or 0.10. This means players who play for the maximum coins will be paying either £15 or £30 – depending on the format selected at the beginning. The maximum win for 15 payline mode is 75,000 coins while the maximum win for 243-ways mode is 121,000 coins.

Smybols-wise fans of the television series will be very disappointed that characters have not been used as symbols on the reels. Instead they are rather basic with the main symbol being the Game of Thrones logo (which acts a Stacked Wild substituting for everything except the Iron Throne uring the base game and free spins feature), along with House Baratheon, House Lannister, House Stark, and House Targaryen symbols. Completing the line-up of symbols is the Iron Throne (the games Scatter), and playing card symbols A, K, Q and J.

Gamble Trail: Players can take advantage of the Gamble Trail feature which can be activated after any base game win. You are then presented with a trail map on the screen which contains four locations. You begin at 3 Eyed Raven, and if you successfully double your money you can progress to White Walker, then DireWolf, and the final destination is Dragon. In order to advance from each location you must guess heads or tails on a coin which contains the title of the 10th episode of the second series of Game of Thrones, Valar Morghulis. If you guess correctly you will double your win amount, but guess incorrectly and you lose your winnings from the spin.

Free Spins: The free spins mode is the main bonus feature in Game of Thrones. This is triggered by landing three or more Scatter symbols (Iron Throne) on the reels at any one time, and will offer you the opportunity to serve one of four Houses. Each of the Houses offer different features, which are as follows.

Baratheon – Rewards you with a total of 8 free spins with a multiplier of 5x attached, plus the Baratheon high symbol is stacked to three.

Lannister – Rewards you with a total of 10 free spins with a multiplier of 4x attached, plus the Baratheon high symbol is stacked to four.

Stark – Rewards you with a total of 14 free spins with a multiplier of 3x attached, plus the Baratheon high symbol is stacked to five.

Targarven – Rewards you with a total of 18 free spins with a multiplier of 2x attached, plus the Baratheon high symbol is stacked to six.