Thunderstruck is a 5-reel, 9-pay line online slot from Microgaming. This slot is one of the most popular online slots games of all time, and has even spawned a sequel named Thunderstruck II. The theme of this game is Norse mythology, as it centres around everyone’s favourite hammer-wielding god, Thor. Originally released in 2004, this game has really stood the test of time and remains eminently playable. 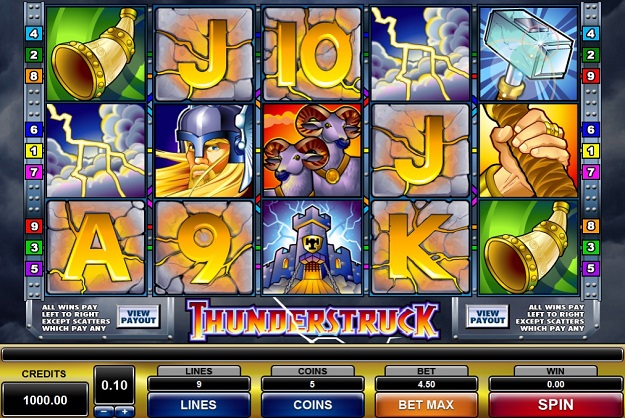 All the symbols used in this classic online slot are associated with the blonde, long-bearded king of thunder himself – his horn, his castle and of course his magical, thunder-inducing earth-splintering hammer. These symbols are joined on the reels by playing card values nine through to ace.

There are only nine available pay lines, and the number you want in play is selectable – just click on the numbers at the side of the reels to make your selection, or the ‘select lines’ button at the bottom of the screen. You can also choose your coin value from 0.01 to 2.00 here using the ‘-‘ and ‘+’ buttons.

The ‘select coins’ button chooses how many coins you want to risk with each spin from one to five. Your final wager is these three items multiplied together, meaning your lowest possible wager is 0.01, and your highest 90.00.

To win one of the available pay outs, you need to land at least three (and on some occasions, only two) identical symbols in sequence on one of your active pay lines from the left-hand reel onwards. There are several jackpots available, from 2x your bet-per-line for two nines, up to the jackpot of 10,000x for five Thor symbols.

If you’re happy with your wager settings, then click the ‘spin’ button to get the reels thundering!

Wild Symbol: As this is Thor’s game, it’s only appropriate that Thor stars as the wild symbol, and the Norse god substitutes for all other symbols aside from the scatter symbol. In addition, any winning line that contains Thor has its pay out value doubled.

Scatter Symbol: A pair of regal-looking rams acts as the scatter symbol, and if at least two of them show up anywhere on the reels, then you win yourself a cash payout.

Free Spins Feature: Fifteen free spins are awarded if you land at least three scatter symbols anywhere on the reels. All wins during free spins are tripled, and free spins can be re-triggered.

Gamble Feature: Any win struck while playing this game can be gambled. If you fancy this, click the ‘gamble’ button available after a win. You are shown a card that is dealt face down. You can either guess the colour of this card to double your win, or the suit to quadruple it. Once you’ve made your pick, the card is revealed. If you’re successful, you can either gamble again until you reach the gambling limit, or collect. If you choose wrong, then your payout is reduced to zero.

This fast-paced game is still fun to play, but as now it is over a decade old and has since been super-ceded by its groovier sequel this slot’s popularity has begun to wane. It helped established the classic online slot attributes of wilds, scatters, free spins and the gamble feature, but as more modern games have added extra features such as bonus games, you may find the gameplay here a little bit lacking.

It’s more than worthy of a few spins now and again, though, so why not spins the reels of this classic online slot whenever you feel it’s ‘Hammer Time’?