Bring on the Greek Gods! Hot as Hades, brought to you by Microgaming, is a mythological journey where you‘ll encounter Greek Gods. It features some good gameplay, great cartoon-style graphics, and fun bonuses. The machine offers five reels, three rows, and 20 fixed pay lines. The minimum bet is 0.20 and the maximum is 50.00 per spin. 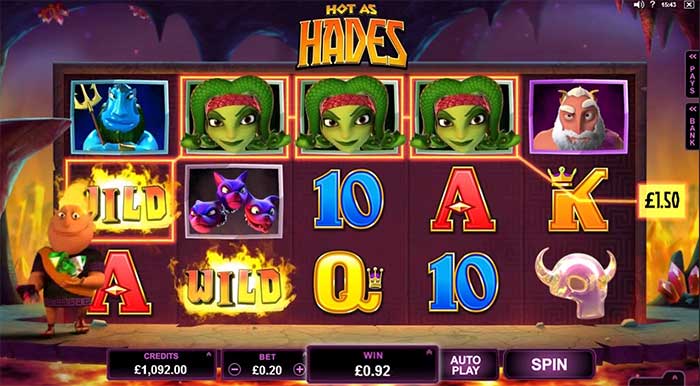 Hot as Hades Gameplay and Symbols

Get ready for fire, lava, and deep and dark mysterious caves because this is where you’ll spin your way to winning in Hot as Hades. The main icons are Hades, Zeus, Medusa, Cerberus, and Poseidon. The rest of the icons are basic colored numbers (10, J, Q, K and A).

When you hit a win in Hot as Hades the animations are awesome and almost jump off the reels. You’ll get a variety of animations, from Hades playing the air guitar to juggling. Every now and then the animations feature Hades’ trusty guard Cerberus.

The wild icon is the Hot as Hades title logo and it will substitute for any other icons on the reels to give you a win (except the scatter). The wild icon also has a two times multiplier attached to it which gives you the opportunity for even bigger wins.

The sounds in Hot as Hades are great, and really go along with the cartoon styled theme. The ambient track is adventurous and mythological while the sound effects are exciting and really carry the action along.

Super Mode Bonus :The Super Mode Bonus is awarded randomly and will give you five free spins. You also get three held wilds, with one added on each of the first three spins. Each wild stays in place for the rest of the free spins. These are awarded by Hades jumping or flying onto the screen and shooting them onto your reels.

Quest for the Crystal Helm Bonus: The Quest for the Crystal Helm Bonus feature is one of the coolest I’ve seen. You activate the quest by hitting three crystal helm scatter icons. Then you’re on your journey to take back the crystal helm, which is guarded by some of your fellow Greek Gods. The animation between the picking rounds is exquisite and the quest is loads of fun. You’ll find five levels as you quest for the helm. Each level is outlined below:

Level 1 – Choose a pot from the Pillars of Awesomeness and you’ll be awarded with a random win. Four wins are available along with a win all option.

Level 2 – Choose a doorway to take a path behind Medusa and her deathly gaze. You’ll find a win all option, three random wins and also one end option.

Level 3 – Choose a clam in Poseidon’s ocean which will award a win, but watch out, there are now two end options.

Level 4 – Choose one of Zeus’ clouds. This level has two wins and two end options.

Level 5 – You made it! Now you get to choose a chest in the Chamber of the Crystal Skull. You have two choices at this level to get the largest possible win and to find the Crystal Helm.

This tongue-in-cheek Greek mythology based game is a great. The graphics and added animations are excellent and the bonus round really is one of the best I’ve tried.

The sounds add to the experience and enhance the overall game play. Although the slots interface is somewhat simple, it certainly does the job and is improved by the animations. The opportunity to hit a big win during the Super Mode and quest for the Crystal Helm feature is great and really makes for a worthwhile slot machine to try.