As the final film in Christopher Nolan’s Batman trilogy, The Dark Knight Rises was one of the most popular films of 2012. With an aging Bruce Wayne forced to come out of retirement to face his latest nemesis Bane, the film was both popular among audiences and well-received by most critics.

With such a popular franchise coming to the end of a hugely successful trilogy, it was no surprise when Microgaming released a Dark Knight Rises online slot machine to follow up on their Dark Knight game. While Dark Knight Rises doesn’t share all the same features as the first Batman-inspired slot, it manages to keep the same heart-pounding action found in the films. 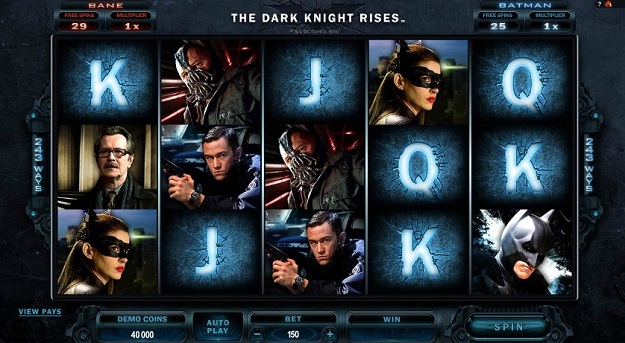 The Dark Knight Rises is one of the most popular games in Microgaming’s 243 Ways line of slot machines. In these games, there are still five reels of action with three rows of symbols displayed. However, rather than paying by the line, players make one flat bet that covers every possible left-to-right winning combination. There are 243 ways to win in all, which is what gives these games their well-known name.

In this case, players may play with coins ranging from €0.01-0.05. That might not seem like much, but since it’s possible to play for up to 150 coins, you can potentially spend as much as €7.50 on each spin.

In order to win prizes during your spins, you’ll need to match three or more of the same symbol from left-to-right across the reels. The lower-value symbols are the poker symbols from jacks through aces, while matching characters from the movie can earn you bigger rewards. Batman is the biggest winner among the standard symbols, bringing in up to 2,500 coins for a five-of-a-kind. Meanwhile, the Batman logo acts as a wild symbol; if you can hit five in a row, you’ll win up to 5,000 credits if you’re playing for max coins.

There are a couple of special features that can happen on any spin, as well as a major free spins feature that we’ll go into in more depth.

Expanded Wild: First, the middle reel will sometimes reveal and expanding wild symbol that will fill to cover the entire reel. This can potentially cause some major wins, as it will create wilds on each of the 243 paylines in the game.

Symbol Scramble: Next up is a random feature known as Symbol Scramble. This can happen at the end of any non-winning spin, and causes the symbols on screen to shift around in order to create the biggest possible wins for you. While you won’t see any massive wins from this feature, it can often turn a complete loss into a moderate win, which is always a nice surprise.

Free Spins Features: During gameplay, you’ll notice that there are two meters at the top of the screen: one for Batman, and another for Bane. Each one of these begins by displaying 10 free spins and a 1x multiplier. At the end of many spins, you’ll see Batman and Bane fight; this will cause one of the meters to increase its spins or multiplier.

In order to trigger these meters, you’ll need to hit three of the bomb symbols anywhere on the screen on a single spin. If you can pull this off, you’ll then have the option to play with either the Bane or Batman free spin rewards that you’ve collected during gameplay. Sometimes, one meter will be far enough ahead to make it a clear choice, but in other cases you may also want to consider the special features that come with each version of the game.

With Bane, you’ll start with the Rolling Reels feature. This will cause any winning symbols to explode after awarding coins, allowing new symbols to fall in their place (potentially causing yet more wins). After triggering the free spins feature enough times, Bane will also allow you to use the Super Stacked Wilds feature, which gives you a huge number of stacked wilds on the 2nd and 4th reels.

If you choose Batman, you’ll start with the Extra Wild Blast, in which you can choose to make any additional symbol you like wild for your free spins. Later on, you can unlock the Heat Seeking Wilds feature, which will add special wild symbols on reels 2, 3 and 4. These wilds can split to create even more wins.