Play Under the Bed

Under the Bed Game Information

So, what lurks under your bed? In the beautifully-animated and entertaining 5-reel, max-30 line payline slot from NetEnt, there’s more under the bed that just a few dust bunnies and maybe some questionable magazines.

The ‘stars’ of this beastly slot are various nasties who prevent a couple of very small children named Jessie (boy) and Jane (girl) from obtaining any night-time slumbers. Despite having such a girly name and incredibly short legs, Jessie is the brave little soldier of this affair, vanquishing the beasties back to wherever they came from. Which would be under the bed, we suppose. 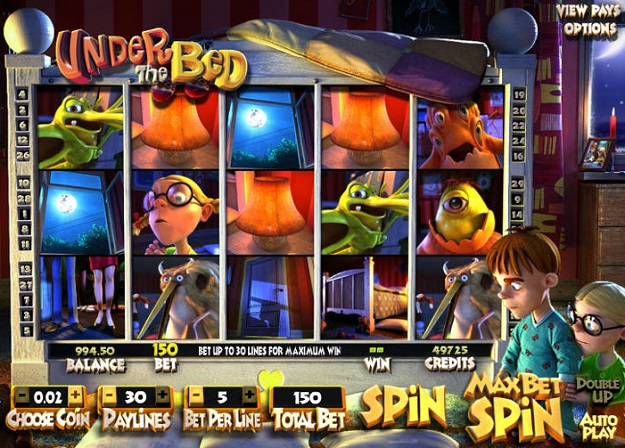 Visit www.DrakeCasino.eu to play Under The Bed now!

Under the Bed Gameplay a Symbols

Jessie and Jane stand to the right of the reels watching your spins and watching out for mischievous monsters. Their head-bobbing does get a little annoying after a while, as does Jane’s insistence on performing the Heimlich manoeuvre on Jessie every time you hit ‘spin’. The other animations are superb though, especially when Jessie stomps on a beastie and puffs his little chest out with pride.

You can select your coin value from 0.02 to 1.00, and the number of pay lines you want to have in play from one to thirty. You can also select your bet-per-line from one coin to five. Your final wager is all three of these totals multiplied together, and the more you bet, the higher the jackpots.

The lowest prize is for landing three ‘open window’ symbols, which awards you five times your total wager. Top of the spooky shop is the eternally-fearful Jane, at 500x. All payouts are from left to right only.

Under the Bed Bonus Features

Under the Bed Wild Symbols: There are four Under the Bed wild symbols, all of which are standard monster symbols with a golden rim around them. Land a paying monster combination that includes the rimmed symbol and the monster in question will appear from under the bed and flip the symbol. On the other side will be a number, which is the number of spins that the wild symbol will ‘stick’ in place. The monster will then vanish, but not without giving Jessie or Jane a slight night-time freak-out first.

Mysterious Door Bonus Game: If you land the mysterious door symbol in the middle position of the central reel, then a hand will reach through it, out of the screen, grab you by the scruff of your neck and tug you under the bed and into the monster’s bedroom. Here you are awarded a dozen free spins before you are returned to the main game. All jackpots during free spins are doubled.

Bed Bonus Scatter Symbol Game: If you land at least three bed symbols anywhere on the reels, you’re into the bed bonus game. Here, Jessie and Jane are seated on their bed, armed with a torch, and you’re presented with five cards to choose from. The idea of the game is to uncover as many monster cards as you can before you reveal the ‘mom’ card. Each monster you pick gives the kids a scare, and pumps some cash into your bank balance. The arrival of mom ends the round, and you collect as much cash as you’ve amassed so far.

Double Up Feature: You can play double-or-quits with all your wins. You simply have to choose whether the total of three dice that’s shaken by one of the monsters will be odd or even. Choose right to double up, or choose wrong to lose it all.

Under the Bed Conclusion

Under the Bed genuinely is everything an online slots game should be, and NetEnt deserve multiple plaudits for introducing it into the world of online slots.

The sound FX, soundtrack and animations are all superb. You never tire of seeing Jessie don a hockey mask as he prepares to fight off the baddies, or when he jumps into Jane’s arms whenever the hairy, insect-like beastie pays a call.

With the added bonus features and game, Under the Bed truly is an online slots that’s nothing to be scared of – quite the contrary, in fact!

Visit www.DrakeCasino.eu to play Under The Bed now!