Treasure, women, and sailing the seven seas – the life of a pirate is a glamorous one, at least in the movies. Pirate tales have been some of the most exciting adventures in the world for centuries now, and in recent years, they’ve been revived by the Pirates of the Caribbean movies, which have brought new life into the pirate mythos.

Of course, pirates are a great theme for a slot machine. They like treasure, and you like winning big prizes: it’s a perfect match! Barbary Coast brings these elements together seamlessly, allowing you to enjoy a pirating adventure while winning your own booty along the way. 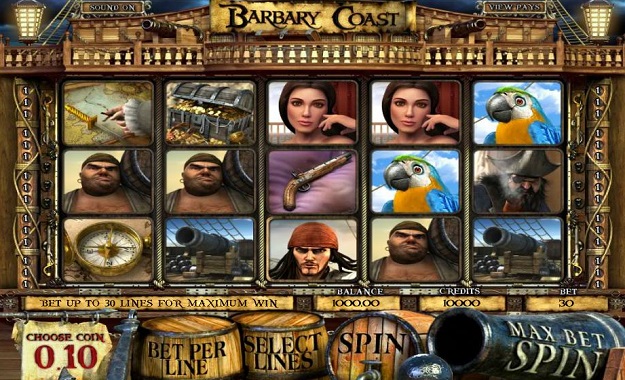 Barbary Coast is one of the most popular 3D slot machines in the Betsoft Gaming slots range. It’s a 30-line, five-reel slot machine in which players can play up to five coins per line, at a cost of up to $1 per coin. The object of the game is to match three or more of the same symbol from left-to-right across any of the active paylines.

Predictably, Barbary Coast has a very heavy pirate theme during the game. Many of the symbols depict classic things you might find aboard a pirate ship, and the game’s graphical interface looks like the top deck of a classic pirate chip. The music is the kind of rousing theme found in adventure films, and there are plenty of sea sounds to hold together the game’s mood. There’s even an animated sequence at the beginning of the game that takes you into the world of the Barbary Coast. The special features, as you’ll see later on, also compliment the game’s theme very nicely, both in style and execution.

The standard symbols include items you’d expect a pirate to have on hand, such as barrels of ale, maps, guns, and treasure. The highest-value symbol is a beautiful maiden – because every pirate needs a girl, right? Some players may be disappointed by the relatively low payouts available from the standard symbols; even matching five of the maiden across a payline will only earn you 300 credits per coin wagered. However, it’s also worth noting that even the low value symbols have reasonably high payouts (for instance, the barrel of ale – the lowest value symbol – earns you 10 credits per coin just for matching three), and the bevy of special features and bonus games give you plenty of ways to increase your winnings.

Barbary Coast is loaded with special features that can make you a very wealthy landlubber. First, if you can match three or more parrots (always a favorite among pirates), you’ll activate a free spins feature – not that exiting, but free spins are always a welcome reward.

Another bonus round that’s popular in Betsoft Gaming slots is the “Click Me” game, and Barbary Coast has one featuring the game’s main character, Ben Sawyer. If you land three or more of this heroic pirate anywhere on the reels, you’ll get to choose between the Sawyer symbols to win instant bonus credits. Unless you hit a symbol that also has the word “collect,” you’ll get to keep choosing more symbols; manage to open all of the Sawyer symbols, and you can win 900 credits or more.

One of the most thematic bonuses is the Explosive Wild Reel. This game begins only if you land a cannon on the center reel. When this symbol appears, the center reel will be covered by a plank of wood, which will cause a pirate to fire your cannon at it. The result is the entire third reel turning wild, increasing your wins exponentially! The first time we triggered this feature, we had two maidens on the first two reels, so having the third reel turn wild allowed us to win on several different paylines at the same time. Playing for maximum coins, our win ended up as nearly 3,000 credits! The wild reel does last for one additional spin as well, giving you an extra chance to take advantage of it.

The most dramatic bonus round has to be the Fight Bonus. Hit three or more of Captain Blackbeard on an active payline and you’ll trigger this game, in which you’ll help Ben Sawyer in a swordfight against Blackbeard himself. You’ll pick which moves Sawyer will execute, then watch the battle unfold as he attempts to rescue a beautiful woman from Blackbeard’s clutches. The better Sawyer performs, the more cash you’ll win!

Barbary Coast has to be one of the most entertaining and engaging slots we’ve played in a long time. The online slot bonus rounds are a lot of fun, the music and graphics really are rousing and appropriate for the pirate theme, and the gameplay is varied and interesting enough to hold your attention, which means the game doesn’t quickly become monotonous like many other slots. While the prizes offered aren’t the biggest around, they’re certainly substantial enough that you’ll be very excited when you score a big win. We recommend that you give Barbary Coast a spin: before you know it, you’ll be thinking “it’s a pirate’s life for me!”