Whether you’re familiar with the original story by Robert Louis Stevenson, the Broadway musical or any of the many film adaptations, just about everyone is familiar with the basic story of Dr. Jekyll and Mr. Hyde. The tale of a man that has split himself into two personalities, one good and one evil, is now one of the most enduring stories in our culture. That makes it the perfect subject for an online slot machine, and Betsoft has created a game that cleverly combines this theme with excellent gameplay. 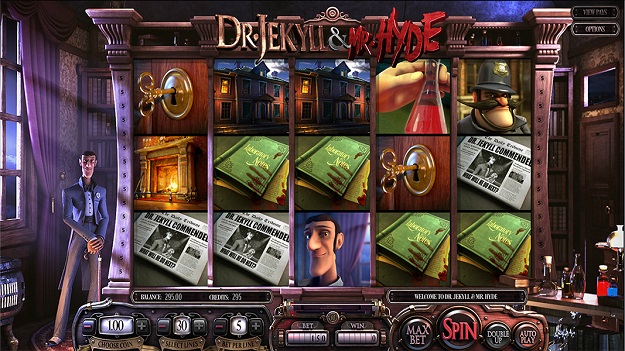 Dr. Jekyll & Mr. Hyde is a five-reel, 30 payline 3D slot machine offered by Betsoft featuring a maximum win of 480,000 credits. Players can choose to bet between 0.02 and 0.50 per coin, and up to five coins per line, providing plenty of range for players with various budgets.

One of the first things you’ll notice on this machine is the high quality of the graphics and sound. Set inside Dr. Jekyll’s laboratory, the good doctor himself will wander around the screen while you play, occasionally reacting to your spins. You’ll also see animated sequences each time you hit a winning combination, adding to the heavy atmosphere of this game.

The object of the game is to match symbols from left to right across your active paylines. Three symbols in a row are required to win, with smaller prizes coming from newspaper headlines, journals, fireplaces and policemen. For the biggest possible wins, you’ll want to find either Jekyll or his alter ego Mr. Hyde, as either of those symbols can potentially earn you up to 6,000 coins if you should hit five in a row! There’s also the Dr. Jekyll & Mr. Hyde symbol, which acts as a limited wild: it can’t win prizes on its own, but it can substitute for either Jekyll or Hyde as necessary.

Like many of the Betsoft 3D slots, Dr. Jekyll & Mr. Hyde is loaded with special features. Here’s a look at the bonuses you might encounter during play:

Wild Hydes: If you hit red potion symbols on the second and fourth reels, with a Jekyll symbol (or the logo symbol) in between them, you’ll trigger this feature. All Jekyll, Hyde, and logo symbols on screen will become Wild Hydes, after which all of the symbols on screen will swirl together and randomly take new positions. This means that the wilds and other symbols could land anywhere, usually earning you big rewards (plus bonuses for matching Wild Hyde symbols).

Blue Potion Bonus: If you hit blue potions on the second and fourth reels and a Hyde symbol (or, again, the logo symbol) appears between them, you’ll receive an instant bonus. This will randomly award you cash equal to a multiple of the amount you bet on that spin, and could be anywhere from 5x to 20x your bet.

Free Spins Game: Every time you find a red potion symbol on your screen at the end of a spin, you’ll help fill the potion meter. It takes a lot to fill the meter, with 100 red potions required to complete the meter. But when you do, you’ll unlock a free spins mode that can potentially continue for a long time. Your free spins will continue until you fill up the blue potion meter, which takes 12 blue potion symbols in order to complete.

Frenzy Bonus: If you can hit two Hyde symbols on the second and fourth reels with a logo symbol in between them, you’ll activate a special bonus game in which you guide Mr. Hyde through the streets of London. Your goal is to steal as much as possible and avoid the police. At the end of the game, you could win as much as 30 times your initial bet.

Potions Bonus: When you find two Jekyll symbols on the second and fourth reels with a logo between them, you’ll get to play the potions bonus game. In this game, you’ll have to choose between various ingredients in an attempt to craft an anti-monster potion. The faster you make a potion that works, the larger your prize will be, up to a maximum of 120 times your spin bet.