From the time they began offering their brand of surreal comedy in 1969, Monty Python has been considered one of the funniest comedic groups in the world. The British troupe first came to fame with the television show Monty Python’s Flying Circus, and gained worldwide acclaim with the release of their 1975 film, Monty Python and the Holy Grail.

In 2005, that movie was adapted into a Broadway musical called Spamalot, which once again brought success and accolades for the group. Now, online slots players have the ability to relive all of the absurd humor and special moments that earned the show a Tony Award for Best Musical through the Spamalot progressive slot machine by Playtech. 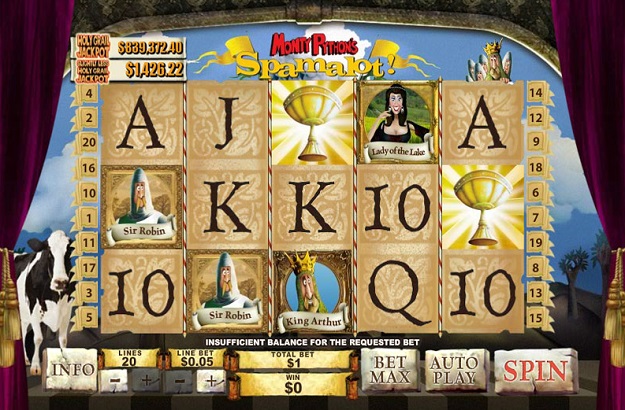 Spamalot is a five-reel, 20-line slot machine that can be played at any Playtech casino site. The game offers the option to play with a wide variety of coin denominations, typically ranging from 0.01 to 1.00. Players can only bet one coin per line, which means it’s possible to spend as much as €20.00 on a spin if you’d like to do so – and as we’ll talk about later, there are definitely benefits to going big on this machine.

The common symbols found on the reels here are petty typical: the poker ranks ranging from tens through aces. Of course, the theme of this game really shines with the higher value symbols that are pulled from the musical itself, such as knights of the round table like Sir Lancelot and Sir Robin, or the Lady of the Lake. The biggest standard win comes from King Arthur: if you can link together five of him on the same payline, then you’ll win 600 coins. There’s also the Holy Grail symbol, which acts as a wild. Match five of those together and you can win up to 5,000 coins.

Free Spins and Progressive Jackpot: If you hit three scatter symbols anywhere on the screen, you’ll earn 10 free spins. During these spins, you can collect Holy Grail symbols on the middle reel. Collecting five of these takes you to the Holy Grail Bonus game, where you can try to move up through six levels of play, collecting prizes as you play. Should you survive through the sixth level, you’ll have a shot at winning the mass Holy Grail Jackpot, a progressive that starts around €366,000 and can be worth millions! There’s also a Slightly Less Holy Grail jackpot that, as a consolation prize, starts closer to €100 and hits far more often.

If you can manage to land cloud symbols on the first and final reels on the same spin, you’ll cycle through four unique Monty Python-themed bonus rounds. Here’s a quick look at each game:

Storm the Castle: In this game, you’ll choose from one of six places to stand. The French soldiers will then launch a cow at you! If it misses, you’ll win a prize and get to play again. The game continues until you get hit.

None Shall Pass: In this game, you’ll duel the Black Knight by attacking him four times, removing all of his limbs in turn. At first, each hit earns a prize with a 5x multiplier; however, misses will drop the multiplier for future hits.

The Knights Who Say Ni: In this “Let’s Make a Deal” style game, you’ll pick shrubberies for the knights and be awarded with a prize. However, you’ll have the option to go back and pick a different shrubbery if you’re not happy with the initial prize. Of course, there’s always the risk that the next win will be lower! You can try up to a total of three times before locking in your prize.

The Killer Rabbit: Figure out which rock the rabbit is hiding behind to win a prize. However, every wrong guess results in a dead knight, lowering the prize when you eventually win.