“Top O’ The Mornin’ to Ya!” Plenty O’ Fortune is yet another Irish-themed slot machine from Playtech, and it is without doubt one of their best yet. It contains a 3D animated Leprechaun who stands on the reels throughout gameplay smoking a pipe in his emerald green suit while performing various actions as the reels spin. These actions include downing a pint of beer and throwing the empty glass away, dancing and jumping for joy in celebration of wins. It is accompanied by magical background music to relax players and several exciting bonus features which offer huge wins! 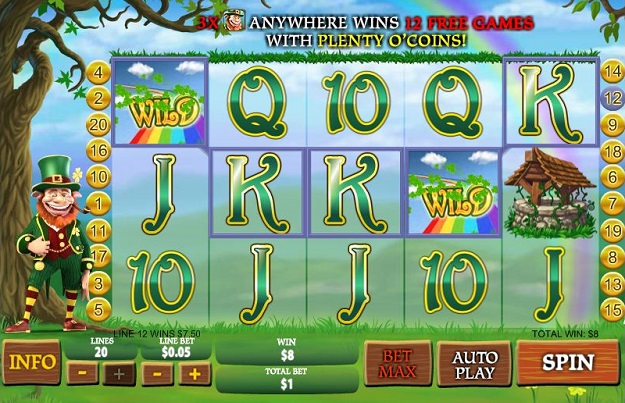 The symbols really enhance the overall theme of the slot, and they are: Rainbow with Wild written on it (yep, the games Wild), Wishing Well, Pot of Gold, Leprechaun, Plenty O’ Fortune Logo, plus Ace to 10 playing card symbols. The Wild is the most valuable symbol with five on a payline paying out a jackpot prize of 500 coins, plus it substitutes for all other symbols except for the Wishing Well, Pot of Gold and Leprechaun. The Queen, Jack and 10 symbols are the lowest paying symbols in Plenty O’ Fortune with five of each on a payline paying out 100 coins in comparison.

Free Spins: To activate the free spins feature in Plenty O’ Fortune players must land a Leprechaun symbol on reel 2, 3, and 4 during the same spin. This sees players rewarded with a total of 12 free spins plus there are three types of coins added to the reels in place of symbols, with values of 1x, 2x and 5x. These coins really increase prizes on winning spins, and the feature offers average wins of around 40x the initial bet, however the feature cannot be retriggered.

Wishing Well: The Wishing Well bonus feature is activated, as you can probably guess, by landing three or more of the Wishing Well symbols. It is an instant-win game and sees Golden Coins fall from each of the Wishing Well symbols which are collected by the Leprechaun, and a counter shows the amount of prize money won while he does so. It should be noted that activating the feature with four symbols offers prizes of around twice as much as when three symbols activate it, while five offer prizes of as much as 10x the amount.

End of the Rainbow: To activate this bonus feature players must land three or more Pots of Gold symbols anwhere on the reels during the base game, and we found this feature to be the one which activates most frequently. It is worth noting that four symbols triggering the feature rewards prizes of around 3x more than if three trigger it, while five symbols triggering the feature rewards prizes of around 10x more. The End of the Rainbow bonus feature takes players to a new screen where they find themselves on a mountain path with six turns, all filled with golden pots which contain either cash prizes or collect (which ends the feature). The first path contains seven golden pots, while the next contains six and they are noticeably larger pots (with bigger prizes too), and this continues until the final path which contains one huge pot with a very large prize to reward players who make it to the final path at the ‘End of the Rainbow’.