Spiñata Grande is a 2015 release from NetEnt – a fun-filled and action-packed slots game with five reels, four rows and forty pay lines. It’s also a very colourful game and has the rarely-used feature of having ‘colossal’ symbols on the reels, which are either four times or nine times larger than the normal symbol size.

This game has a distinct Mexican feel, with four different piñatas available to be smashed. A piñata is a hollow, papier-mâché model in the shape of a donkey or other animal. At a party, the piñata is filled with sweets and hung from a tree. The party’s most valued guest is then blindfolded and handed a baseball bat or stick. Their task is to smash the piñata to smithereens, at which point the rest of the party guests pounce on the released candy to grasp as much as they can. Sometimes the piñata-basher manages to get their blindfold off before all the delicious goodies have been snagged. 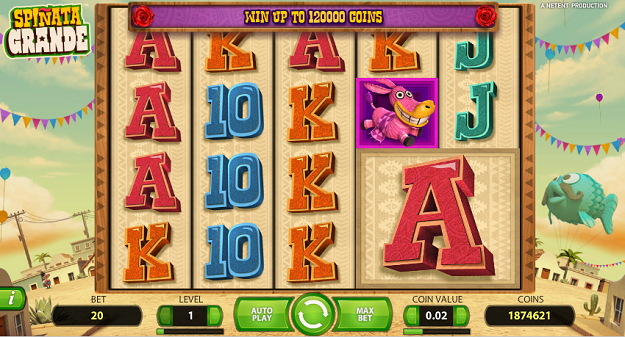 Symbols in this game are playing card values from ten to ace, plus the five piñatas – a bull, a donkey, a parrot and a moustachioed sombrero-wearing fish. There are also a few bonus symbols that become active during the bonus game.

There are forty pay lines in total and they are not selectable – you spin with all forty in play during every spin. You can choose your coin value from 0.01 to 1.00, and the number of coins you want to risk with each spin from one to ten.

Your final wager is always your coin value multiplied by your bet level multiplied by twenty. The lowest possible wager per spin is therefore 0.20, and the highest 200.00. When you are happy with your bet, hit the big green button in the centre of the screen to get those reels spinning. The biggest pay out in normal play is for five red bull piñatas at 300x, and the lowest 2x for three tens, jacks, queens or kings. All wins are paid for identical symbols in sequence from the left-hand reel.

All symbols are arranged as solo symbols, and also in grids of 2×2 and 3×3. These ‘colossal’ symbols act as four and nine versions of the same symbol respectively.

Mini-Slot Feature: The 3×3 ‘Colossal Bonus’ symbol turns into a mini slot machine whenever it appears on the reels – even partly. Each separate section of the symbol will then spin to reveal either coins or a bonus symbol. There are three types of coin: bronze (worth 20x), silver (worth 40x) and gold (worth 80x).

Free Spins Feature: During free spins the reels change as colossal playing card symbols disappear and the ‘Colossal Wild’ symbol appears. This is a 3×3 symbol in the form of a large laughing skull with roses for eyes. If you manage to land this huge wild symbol in the right place you can win a chunky cash amount.

The Colossal Bonus symbol remains active during the free spins, but when lands it will only trigger bronze coins and extra free spins.

This slot is definitely another winner from those smart guys at NetEnt. Initially, this does seem to look to be quite a complicated game with those 2×2 and 3×3 sized symbols, but you soon get the hang of it.

Landing the Colossal Bonus symbol is always thrilling, especially when you win those free spins and the scary colossal wild symbol slinks into view, and there’s a real chance of some genuine super-sized cash jackpots.

Why not take Spiñata Grande out for a few Spiñatas? You’re guaranteed to have a smashing time!