GOALLL!!! Shoot! is a fantastic, football-themed online slot from Microgaming with 5 reels and a maximum of 50 pay lines. The game is based on the classic football magazine that launched in 1969 and for forty years was the footie mag no discerning football fan would be seen dead without, with its news and features, results and line ups, and the annual ‘League Ladders’ giveaway.

Sadly, Shoot! eventually went the same way as football terraces, the European Cup Winners Cup and the Home International Championships and disappeared from newsstands in 2008. Happily, Shoot! was relaunched in 2011 as an online-only periodical. Result! 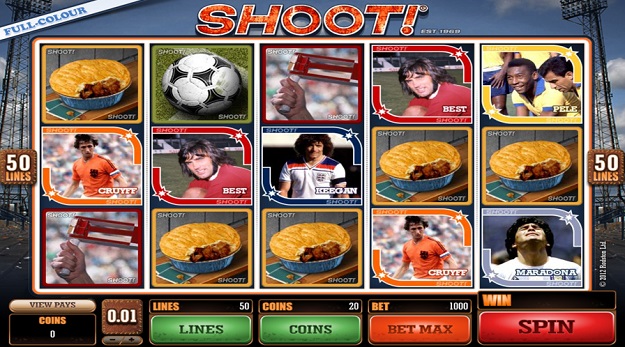 It’s time for footie fans to get nostalgic as many of the symbols used in this game are the top players of the 1970s and 1980s. Included are Pele (footie experts will notice in the slot that Pele’s Brazil kit has been ‘coloured-in’, but incorrectly), George Best, Franz Beckenbauer, Diego Maradona, Johann Cruyff and England’s own bubble-permed hero, Kevin Keegan. Complimenting these superstars are a football, a rattle and a nibbled pie.

You can have a maximum of fifty lines in play, and all are selectable. You can also choose your coin size from 0.01 to 0.10, and the number of coins you want to risk with each spin from one to twenty. Your final wager-per-spin is these three values multiplied together. The minimum you can wager is therefore 0.01, and the maximum is a net-busting 100.00.

When you’re happy with your wager, hit ‘spin’ to kick off the reels. There are plenty of possible pay outs available, and to score a win you simply need to land at least three identical symbols in sequence from the left-hand reel on an active pay line.

The lowest payout is 3x for eating all the pies … or at least three of them. Your championship-winning jackpot is for five ‘Shoot!’ symbols, which wins 75x your stake-per-line.

Wild Symbol: The Shoot! symbol acts as the wild symbol in this game and substitutes for all other symbols aside from the scatter.

Scatter Symbol: The ‘Shoot! Bonus’ symbol acts as the scatter symbol and you only need to land two of them anywhere on the reels to win a cash prize. If you land three or more, you also win through to the ‘Trade ’em Bonus’ game.

Trade ’em: This feature re-creates the 70s and 80s craze for classic football stickers. You get to choose four stickers from a dozen football superstars. Each sticker will either reveal a cash amount that’s added to your bankroll, or a ‘Free Spins’ or ‘Magazine Bonus’ that takes you through to a ‘Second Level’ bonus feature.

Free Spins: If you land this bonus, you receive between ten and thirty-five free spins, during which all pay outs are doubled. Free spins cannot be re-triggered.

Magazine Bonus: In this feature you are offered twelve copies of the classic Shoot! Magazine. Ten of the magazines contain a prize, while two of them hide a dreaded red card. You keep picking magazines until a red card is revealed, at which point the feature ends and you collect your prize.

All football fans in their mid thirties and beyond should remember Shoot!, and this game will give them all a great sense of nostalgia for those ancient days before The Premier League was introduced, and the powers that be decided that from now on only Manchester United or Chelsea were allowed to win the title.

With its colourful graphics and striking gameplay, Microgaming have really hit the back of the net with this onion-bag busting online slot.